Is the GlocalMe G2 Is Any Good? Who Knows 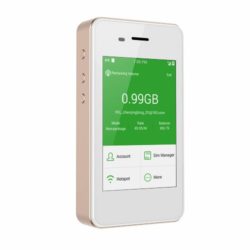 (tl/dr: It takes a lot of effort to tell online if a new product, the GlocalMe G2, is for real, and even then you can’t tell for sure.) I’m planning an extended trip to Europe this summer, in which I’ll be in three countries. It would be nice to have easy and not-too-expensive Internet access while on the move. I will be staying in places that say they have wifi; they say they do, but you never know with airbnb. Plus I’ll be out and about and it would be nice to have data on my phone when I want it when outside the apartment.

My telco offers international roaming at $25/100mb per device. That is not great, but it is not as bad as it can be. Then again, when you figure there are two of us carrying cell phones around, for a month, including some extended train journeys, it could add up. Plus, I travel abroad regularly enough that I’m willing if necessary to consider spending some fixed sum to cut down the variable costs. (Alternately, for $10/day my telco offers me the same data, talk, and text I have at home….which almost sounded tempting until I found out what the telco meant was $10/day per device, so if we used it every day that would $600 instead of $300.)

On the other hand, even though my phone is unlocked, I’m not all that interested in changing SIM cards in my cell phone. I’d like for people to be able to reach me at my usual number in emergencies, and that won’t happen if I take my regular SIM out of the phone to replace my regular SIM with a local pre-paid SIM that offers better rates.

Enter, maybe, the GlocalMe G2, the product of a Kickstarter campaign. For the rather hefty sum of $159, the G2 purports to do three things: First, the G2 offers a SIM-free roaming internet connection, which your phone and other devices can access via wi-fi. Second, the G2 has two slots for local SIM cards, which can be used to access local data, and also get pushed out to my devices via wifi. Third, although I don’t care about this feature, the G2 can offer a modest recharge to an electronic device such as a smartphone.

As regards the SIM-free internet, the GlocalMe G2 comes with 100MB of Internet use pre-provisioned and more can be purchased for 0.05 EUR/mb on pay-as-you-go or you can (as I probably would) buy a 1G global data package at 29.9 Euros — which is less than an eighth of what my telco would charge for one phone, plus the G2’s wifi can be shared.

But is the GlocalMe G2 any good? How is the access abroad? How widespread and how fast? How easy is it to toggle between the inserted SIMs and the default provision? This is where one looks for reviews; but there aren’t any I can find except at Amazon. (A predecessor device has at least one independent review.) On the whole the Amazon reviews are not bad, but there are red flags.

The first red flag is an astonishingly negative attack at Who Gave Them the Money, Is GlocalMe/uCloudlink a fake company that’s tricking consumers and kickstarter? The article suggests that the positive Amazon reviews are fakes.

That analysis is echoed by the second red flag. I ran the reviews through the cool tool at Fakespot and the Amazon reviews of the GlocalMe G2 got a grade of “D”. But then I ran it again and the grade was “B”. So now I’m really puzzled.

A third red flag is the negative reviews on Amazon. They’re in a minority, but they do suggest some bad themes: a poor software update a few months ago that may not have been fixed; once on, the GlocalMe G2 doesn’t turn off even when you ask it to, burning battery and data. Plus at least one of the reviews mentions that the company is offering credits to folks who offer five-star reviews.

So I have doubts about the GlocalMe G2, probably enough to stop me plunking down $156 for it. A hardcore review from someone who’d carried it around Europe would really help. It seems GlocalMe G2’s are also rentable, although that probably would only make sense for a trip of a week ($63) or very little more, after which point you might as well buy one.

Anyway, right now I’m leaning to my telco’s 100mb for $25 deal, which even though it is horribly overpriced, it is easy to use (and to monitor, and to control by turning roaming data off) and, not least, the devil you know.

More generally, this whole mess illustrates one of the great difficulties of shopping online in a world where we cannot trust the user reviews. There’s still an important space for trusted online intermediaries who do reviews. Looks like Consumer Reports may be in business for a long time.

11 Responses to Is the GlocalMe G2 Is Any Good? Who Knows