Florida is the Battleground State

Posted on December 17, 2015 by Michael Froomkin 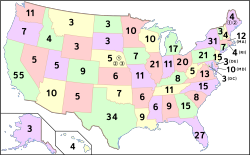 The Electoral College Challenge by by Martin Longman at Political Animal paints Florida as key to the next election.

Guess that means a lot of very repetitive TV ads. Good thing I never watch live TV and can fast forward through them all.

8 Responses to Florida is the Battleground State