This strange sign popped up on an official signpost less than two blocks from where I live: 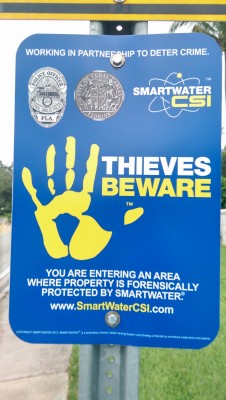 In case it’s too small to read you can click for a bigger one, or take my word for it that at the top it says, “Working in partnership to deter crime.”  Then it has a Coral Gables Police badge next to the seal of the City of Coral Gables, along with the logo for “SmartwaterCSI”.  And the sign says, “Theives Beware.  You are entering an area where Property is forensically protetcted by SmartWater®.”

SmartWater is an asset protection system in the form of a clear liquid which contains a unique forensic code that is extremely robust and guaranteed to last a minimum of 5 years within all weather conditions. It is applied to items of value – personal, commercial, and industrial – which are frequently the target of theft.

The non-hazardous patented liquid leaves a long-lasting identifying mark that is invisible except under ultraviolet black light. Law enforcement officials take the smallest micro-fragment of SmartWater from stolen property and send it to SmartWater’s forensic laboratories, where it is scientifically analyzed to identify the owner.

As a result, thieves who make the mistake of targeting SmartWater marked-assets face a far greater risk of successful prosecution. Ultimately, as the statistics over the past 15 years exhibit, crime is reduced and the public enjoys a safer environment.

More clicking brings me to the price list: $100 (well, $99 before tax) for a bottle of the stuff and a one-year license — apparently you have to keep paying the $100 every year to maintain your entry in their database, even though the coating is supposed to last for five years. Or you could pay $200 (per year!) for a what I suppose is a larger bottle that does your car, or at least key parts of it that don’t have a VIN. Oh yes, you also get stickers to show off you think you have lots of valuable stuff worth stealing deter really up-to-date thieves.

Nowhere on the Smartwatercsi site (that I got sent to by the sign on public land) does it reveal a secret disclosed in this video that I found by doing some Googling: apparently by calling 305-441-5760 Coral Gables residents can get a “smartwater kit” for $30 (no mention of the annual fee after that, though). I called that number and got a recording telling me I’d reached the Coral Gables Citizens Crimewatch, they were unable to answer the phone but they are there to serve and assist me in any way, so I should my name and number and they’d get back to me.

More Googling revealed a Coral Gables police press release dated Feb. 12, 2014 that says you should call 305-476-7957 for the $30 offer. (It may have come out in February but this is the first I ever heard of it.) That number took me to what proclaims itself as the Coral Gables Police Department Smwartwater hotline. I’m going to rate the hotline water temperature at only lukewarm, given that this too was a recording that wanted my name and number and would get back to me.

Actually, I’m kidding about the last one – a drink and a crime deterrent are sufficiently dissimilar to make a likelihood of confusion as to the mark highly unlikely, and of course the website (but not the product) has “CSI” at the end of it. Wait, does the TV show know about this?