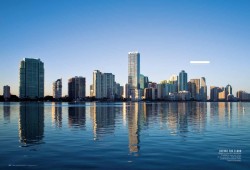 Eye on Miami has the scoop on Goodbye, Miami, Rolling Stone’s big Miami story due out tomorrow. It’s a recounting of Miami’s difficult future if/when sea levels rise, and the ostrich-like head-in-the-sand approach to planning by local, mostly Republican, elected officials. There’s also a major cameo by our local power executives, who not only have aging nuclear reactors in a future flood zone but want to build more.

Even though, as EoM notes, none of this is news if you’ve been paying attention, that doesn’t make it any less of a likely/possible mess. But as most of the most likely scenarios put the really serious stuff more than 20 years out, that puts it outside the time horizon of Miami’s endlessly short-term planners.

May I suggest a soundtrack for reading the Rolling Stone article? Try Róisín Murphy’s ‘Dear Miami’, my favorite Miami-themed song. And very appropriate, as it includes the lyric “Dear Miami, you’re the first to go, disappearing under melting snow”.

This entry was posted in Global Warming, Miami. Bookmark the permalink.