Full write-up tomorrow, but meanwhile I can say that the Coral Gables Mayoral Debate this evening generated more heat than light. A lot of heat. I thought both candidates behaved pretty badly at times.

As we went into the meeting there was a group of very nice people handing out leaflets outside protesting the Coral Gables garage deal that puts the garage in the Grove, but doesn’t offer the neighborhood any service. 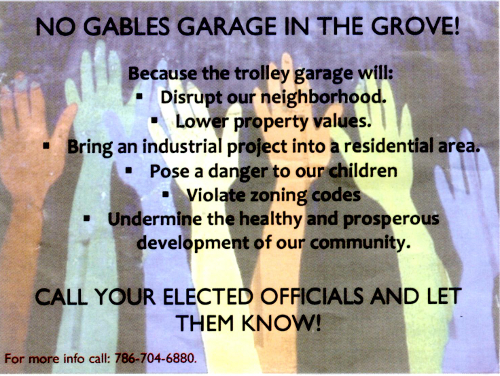 None of the protestors came inside to write out a question for the candidates, or if they did the moderator didn’t choose to ask it, but in any event the issue was never put to the candidates, which I thought was a real shame, especially since the Grove residents are suing, and seem to have a case.

After the event the Cason campaign was handing out 8.5 x 11 color printouts demonstrating the source of the Cason-with-a-liquor-bottle image that figured in the Cason attack ad that I blogged about last week.

Incidentally one of those mailers turned up here yesterday in an English-language version. Here’s the image in question:

Mayor Cason said the Coral Gables liquor bottle was not Photoshopped, as I had imagined, but rather was artfully cropped: the original image shows Cason accepting the bottle from the Mayor of Cognac, to whom Cason had just given the keys to the city. 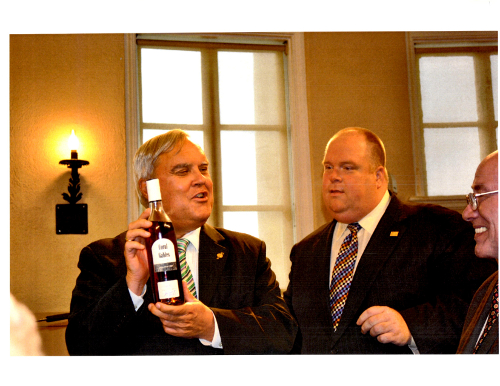 Cabrera said the mailers were not sent by his campaign, but didn’t deny that he knew about them.

But like I said above, there was bad behavior on both sides, and I’ll get to work writing it up. I’m still not sure who I should vote for on this one.