US Incarceration Rates Are Out of Control

I knew it was bad, but not this bad: 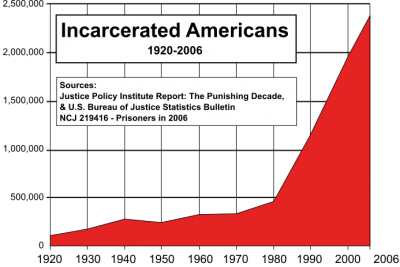 (Spotted via Ian Welsh, Justice is not Law, Law is Not Justice.)

I admit the graph is a tiny bit misleading — it uses absolute numbers rather than percentages of population, which would be better. But even making that correction doesn’t change much: US population grew from 226.5 million in 1980 to 308.7 million in 2010, a 73%36% increase. Meanwhile, however, the number of persons incarcerated almost quadrupled.

Our incarceration rate is by far the highest in the world. The United States has less than 5 percent of the world’s population. But it has almost a quarter of the world’s prisoners. However you draw it, we need to change the shape of this curve. Drug laws are probably the place to start. Three strikes rules would be next. Preventing the privatization of prisons — which creates a lobby for more incarceration — is another good move. Similarly, changing the electoral rule that counts prisoners as (usually non-voting due to felony disqualification) residents of the district in which they are incarcerated rather than their last regular address would also decrease the incentive for state and congressional representatives from those rotten boroughs to push for more rules that create more prisoners.

Ian Welsh argues that plea bargaining should be eliminated also. Civil law trained ethicists tend to agree, however, that the plea bargaining system is immoral since it empowers the prosecutor at the expense of the neutral (the judge) thus producing outcomes we have less faith are just, and puts the defendant to a terrible choice in which he is threatened with punishment — more charges, no deal on sentence — for exercising his right to mount a defense. I’ve long thought there’s something to it but one has to admit that as things stand eliminating plea bargaining would drive the system to a halt unless we first cut down on the number of things we call crimes.

Keep all this in mind while you enjoy thinking about the beneficial effects on the crime rate caused by removing lead from the environment.

20 Responses to US Incarceration Rates Are Out of Control