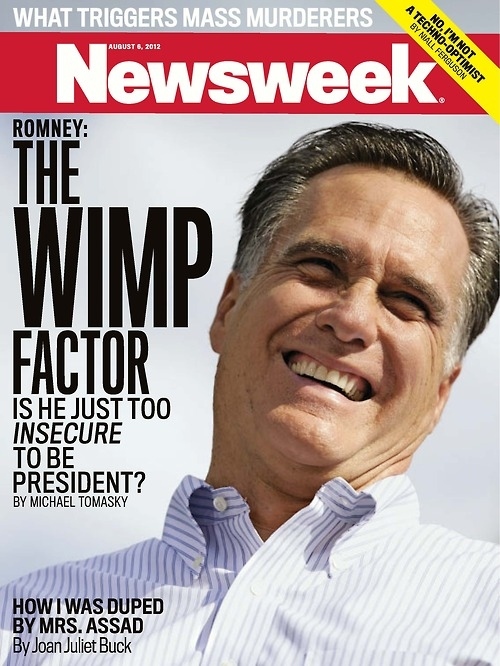 Good thing for Romney that nobody reads Newsweek any more. The article isn’t available online (yet?), but I have to say judging just from the cover it looks like a cheap shot. In any case, I’d have said the problem was arrogance, not insecurity.

(Just to make things worse, my son, seeing this cover’s top tagline said, “I knew Romney was a job killer, but I didn’t realize he was a mass murderer.”)

The Sun even went so far as to dub him “Mitt the Twit.”

It was an astonishing faux pas—one of many packed into his brief visit. And it makes one wonder: if elected, Romney is going to have to work hand-in-glove with Prime Minister David Cameron and other world leaders on the ongoing global financial crisis and other issues. What unintended offenses are going to tumble out of his mouth then, when he’s representing our nation on the world stage?

The episode highlights what’s really wrong with Romney. He’s kind of lame, and he’s really … annoying. He keeps saying these … things, these incredibly off-key things. Then he apologizes immediately—with all the sincerity of a hostage. Or maybe he doesn’t: sometimes he whines about the subsequent attacks on him. But the one thing he never does? Man up, double down, take his lumps.

In 1987, this magazine created a famous hubbub by labeling George H.W. Bush a “wimp” on its cover. “The Wimp Factor.” Huge stir. And not entirely fair—the guy had been an aviator in the war, the big war, the good war, and he was even shot down out over the Pacific, cockpit drenched in smoke and fumes, at an age (20) when in most states he couldn’t even legally drink a beer. In hindsight, Poppy looks like Dirty Harry Callahan compared with Romney, who spent his war (Vietnam) in—ready?—Paris. Where he learned … French. Up to his eyeballs in deferments. Where Reagan saddled up a horse with the masculine name of El Alamein, Mitt saddles up something called Rafalca—except that he doesn’t even really do that, his wife does (dressage). And speaking of Ann—did you notice that she was the one driving the Jet Ski on their recent vacation, while Mitt rode on the back, hanging on, as Paul Begala put it to me last week, “like a helpless papoose”?

This entry was posted in 2012 Election. Bookmark the permalink.