The UMiami Law Legal Corps is a law-school-funded six-month postgraduate fellowship project that places recent graduates in public service or public sector legal jobs around the country. I like to think of it as something akin to a residency for a medical student. The six months start after the Legal Corps Fellow passes the bar exam, so the Fellow can do some real lawyering.

But any time a law school funds its grads for short-term jobs after law school, it is fair to ask whether the program is really doing any good, or whether the school is just warehousing graduates in the hopes of goosing its US News “employed after graduation” statistic. Given that a number of law schools have been caught doing just that, it’s not surprising that some people tend to view these programs with great suspicion.

But in this case, we have some data suggesting the program is really working.

The acid test for any post-graduation ‘bridge’ employment scheme would, I think, have three parts:

I think by all three measures, the UMiami Legal Corps is doing very well. The jobs the students are getting are, by all accounts I’ve heard, prestige jobs with judges, government agencies, and non-profits. With budget cuts all around, these groups seem very happy to have the help, and have serious needs that lead to meaningful work.

But what about the student side? The UM Law school administration was good enough to give me some hard data, and to permit me to publish them here:

I think that’s pretty good given the nature of the legal market and the likelihood that at least some of these students will have self-selected because they were afraid they didn’t have other options — I say “some” because others may have seen this as a way into the public/non-profit sector; non-profit jobs are often harder to get than jobs with entities that actually make money. And while it’s nice that some of the sponsoring organizations found permanent jobs for their Fellows, I think it’s even nicer that the majority found work elsewhere — it suggests that the experience was something other employers considered valuable.

The numbers for the current crop seem on track to be similar: 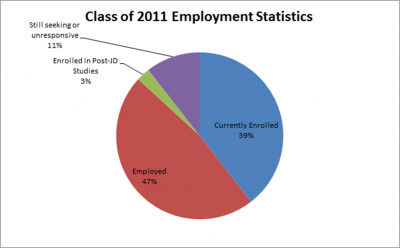 So not only is this program helping train recent grads in lawyering skils, not only is it helping a substantial fraction of them find jobs, but it is also doing good, by putting them in positions where they can use their new legal skills for the public good.

I’m not the only one who thinks this is a pretty nice combination: the Legal Corps has been selected as a human-rights finalist in the upcoming CLASSY Awards, said to be the largest philanthropic prize ceremony in the country.

Here’s where you come in: The winner of the award will be selected based 50% on online voting. So, please, take a minute, and Vote for the Legal Corps to win in the Southern Region’s “Human Rights” category.

Vote now — balloting closes at midnight on the 26th.

This entry was posted in Law School, U.Miami. Bookmark the permalink.