I Am Not Going to New York Tomorrow 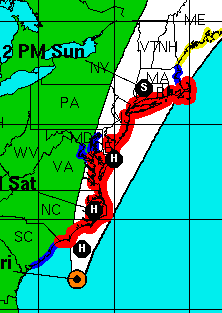 We were planning to go to New York tomorrow, but the event we were going for is cancelled due to the city being closed this weekend for hurricane. It’s a little ironic for a Miami person to not be able to go to New York because they are having the hurricane, but there it is.

I can’t help but be reminded of a previous trip that I scrubbed due to bad weather. I had planned to go to DC in mid-February, 2010. That got scrubbed due to an enormous snowstorm. During the time I’d planned to be away, my aorta burst. Had I been in DC, I likely would not have been as near a hospital, nor as likely to go to one, as I was at home — with deeply bad results. Had I flown out late, delayed due to weather, I could have been on the plane when it happened. Had I been on the plane, I’d be dead.

Instead, I’m pretty well — and very lucky. I hope New York is lucky too.

We’re going next weekend instead, assuming New York is still there. By Miami standards the predicted winds by the time Irene gets to New York seem strong, but not incredibly fierce — sort of on the border between a very bad tropical storm and and a lesser hurricane. But I suppose they’re not as well set up for it as we are.

This entry was posted in Personal. Bookmark the permalink.