President Obama stressed that his administration would draw a firm line on taxes and revenues both in the deficit- and debt-reduction debates and in the buildup to the 2012 elections.

According to multiple meeting attendees, the president reiterated on several occasions that a deal to raise the country’s debt ceiling would include revenue increases, even as Republican lawmakers insist that such a deal should be restricted to spending cuts and entitlement reforms.

"I’ve been very clear about revenues as a part of a balanced package, and I will continue to be," said Obama.

Underscoring his commitment, Obama noted taxes would be a defining area of contrast with Republicans on the campaign trail. He insisted that he would not compromise again on his position that the tax rates for the top earners be raised to pre-Bush levels.

"’Whatever we agree on, we are still going to have plenty to argue about in 2012,’" a senior administration official said, paraphrasing the president. "’I’ve said I’m not going to renew the tax cuts for the top two percent. We might agree on tax reform or simplification, but on the upper-income tax cuts we are just going to have to agree to disagree.’"

I think this is a fair standard against which to measure how great a capitulation whatever debt-ceiling deal emerges in the next day or so is. We already know it’s a substantial capitulation. If the deal puts the extension of those grossly unfair tax cuts back on the table — that’s total capitulation. And we know where it will lead.

PS. Candidate Obama promised in no uncertain terms to close Guantanamo when elected (see the video), then didn’t.

What We Are Getting

Anything can happen, but it appears the GOP is on the verge of pulling off a political victory that may be unprecedented in American history. Republicans may succeed in using the threat of a potential outcome that they themselves acknowledged would lead to national catastrophe as leverage to extract enormous concessions from Democrats, without giving up anything of any significance in return.

When Hitler invaded Poland, many people thought that he could be appeased by concessions and negotiation. It turned out that that the concessions just emboldened him to demand more and more.

Please note that the real deadline is likely something between Aug. 8 and Aug. 15.

Also, please note that if and when the US hits the debt ceiling we will not have a “default”. Nor will the nation lack the fundamental capacity to pay its bills — as of this writing T-bill interest rates are low (i.e. prices are high, and rising). Rather, due to an utterly artificial block by the Congress, the US will not have the cash on hand to pay all its obligations. As a result some obligations such as monies due by contract or monies due by legislation, but almost certainly not bond debt, will not be paid on schedule. It’s as if you maxed out a low-interest credit card because you were not willing to pick up the phone and ask for a credit increase from a lender ready willing and able to give it. And you need the credit because you won’t do any of the obvious things that would raise the money you have already promised to spend.

Finally, note that there is a pretty persuasive argument that the structure of the Social Security trust fund allows an easy work-around the debt ceiling so that Social Security beneficiaries (unlike Veterans, Medicare, Medicaid, and others) can continue to be paid regularly an in full via a procedure that is not subject to the debt limit. (To make a long story short the SSA Trustees redeem their special Treasury bonds, which are counted in the debt limit, thus lowering the nation’s indebtedness. This allows Treasury to sell more bonds to the public, getting cash to make the Social Security payments.)

Thought for the Day

I imagine that in the run-up to World War I, many sensible people in the mobilizing countries fully expected that rationality would prevail and there would not be actual shooting.

Some Facts (!) About the Debt — Where it Comes From, Where It Went

Here’s a great infographic on the debt. 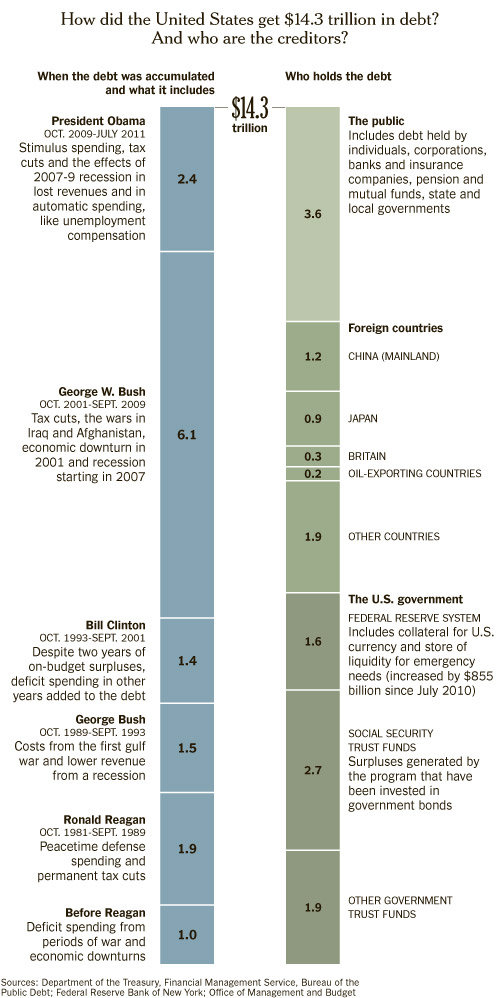 I also recommend the Cumulative Debt in % of GDP chart for recent administrations. Bush beats Obama and Reagan, although I think Obama would probably be larger if one were to normalize for the length of his term. Clinton is a negative number as he was retiring debt — things would be so much better right now if GW hadn’t gone and squandered our money. And started a war of choice. And tortured people. (None of which excuses Obama’s Hooveristic tendency on the economy, the extension of the wars plus the start of a new one, the drone-murder of US citizens abroad, and the rather muted end of torture.)

Source: Econbrowser: Graphic of the Day: Who Borrowed? Who Loaned? via Coral Gables Watch, US Govt Borrowing–Guess Who Borrowed The Most??