They Should Teach Filing in Law School 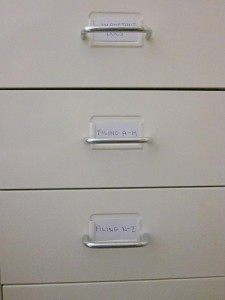 Usually my work is fun, as it involves thinking about interesting problems. This is one the great joys of being a law professor. But much of my work has not been fun this past ten days or so. The law school is doing renovations on my floor over the summer, and in service of this project all my file cabinets were due to be removed last Friday. (See The Paperless Office (Like it Or Not).) I spent most of last week doing triage and tagging with the help of one very game research assistant. In the end I threw away about half of it, filling several recycle bins. It was a very nostalgic process, especially regarding my earliest cryptography, e-cash, and internet work: I had a chance to interact with some amazing people, far too many of whom I have lost track of since. But back to the files. I marked about 40% of the bulk for temporary storage. I took the rest — twelve banker’s boxes — home and am now trying to figure out where to put them. That takes some tidying and reorganization too.

There is, however, one aspect of this problem that does require at least a little thought: I’ve also been trying to create a schema for a paperless filing system since the tentative plan is that the file cabinets are not coming back. As one does I spent some time on Google looking for advice. Most of it was unhelpful, as it involved spending large sums of money on various proprietary document management tools. But I did find a few pieces of what looked like useful advice, especially Exadox’s Folder and File Naming Convention – 10 Rules for Best Practice. They wanted me to buy something too, but never mind that.

So here are the rules I’ve distilled for my use:

I’ve also defined an initial file structure based on asking my secretary for her ideas, and then adding my own ideas based on some time looking through the things found in the drive space she and I share. (I also have my own private space that could really stand to be organized better, but one thing at a time.) The top level of this structure divides the world into Admin, Courses, Research, and Projects. The admin folder has ten sub-folders, only a few of which have sub-folders of their own. None of the other three major sections currently has sub-sub-folders. So it is a very flat structure.

There is one good aspect of all this, however. I think that grading is going to seem joyous by comparison.

2 Responses to They Should Teach Filing in Law School