A big truck pulled up in front of the house about an hour ago, and a man rang the door bell to tell me that they wer 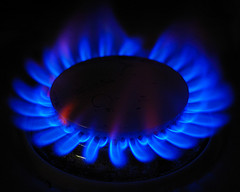 Gas leak? Gas leak??? This was news to me. It seems that Florida City Gas hires some firm to go around and inspect gas meters for leaks, and they found one at our house. No, judging from the yellow cable ties on our pipes, they found two. I can’t hear or smell anything, so it can’t be that serious, but still.

The work team was quick. In half an hour or less they were done. And then the fun began. The work crew can turn off gas supplies, which they needed to do in order to effect their repair. But they are not able or empowered to turn the gas back on. That, says the blue card, requires a call to an 800 number. Fortunately, since my office is undergoing a treatment that the Vice Dean described in a recent memo as akin to “elephants wielding gigantic tree trunks” ranging through the floor, I am at home today, and able to call now rather than at dinner time, when one might just want to cook something.

So I call the 800 number. The automated voice system wants me to punch many numbers, and I do, navigating to the third level in the menu. Then a robo voice tells me I’ll have to be on hold for a bit as they have a lot of calls. I get a moment of muzak, then a click, then silence. More clicks. Silence. Then the dreaded Bell System voice says, “If you’d like to make a call, please hang up…” Yes, I’ve been disconnected.

So I repeat the whole process and get … a human being! He makes me repeat all the info that the automated system already knew. Then he tells me he’ll have to put me on hold to transfer me to another department. Before he does, I explain I’ve been cut off once already — but it seems they know about the problem, they’ve been having lots of trouble with the system, and he promises to call me back if I’m cut off. I also mention that I’m a little perturbed by no one telling me about the leak. He is solicitous, but all he can say is that he’ll make a note of it.

In due course I’m transferred to Jeanne, who has a slow southern voice and very brisk efficiency. Once again I have to explain where the house is (they send me gas, don’t they know where I am?). She wants to know the name of my subdivision too, the first time anyone has asked me this in more than 18 years. Riviera?

As regards my concern that no one told me about the leak, Jeanne is utterly unimpressed. “I think the most important thing is that they told us, so we could come out and fix it.” I agree, but ask if she doesn’t think that maybe I, the resident, should be told too? “No,” says Jeanne. And that is that.

They promise to have the gas back on well before dinner time.

4 Responses to Joys of Natural Gas