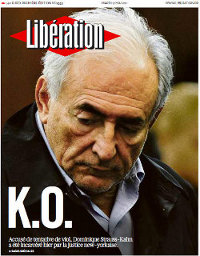 Despite my trawling the French media, the best short explanation I’ve seen of key aspects of the case is, in all places, a philosopher’s blog. Robert Paul Wolff happens to be visiting Paris, and he offers this great DSK summary.

There are essentially four possibilities. First, things may have gone exactly as the young hotel maid says. Second, the entire thing may have been a complete lie, a frame up, a non-event. Third [this one is attractive to French commentators, who know DSK’s reputation], the maid may have come into the room [either intent upon carrying out a sting or not], and DSK, aware of his reputation and fearful that he was being set up by his political enemies, fled precipitously to avoid being found in a potentially compromising situation. And Fourth, sex may have occurred, presumably at DSK’s instigation, but it was sufficiently “consensual” not to constitute attempted rape or sequestration or any of the other things with which he has been charged [this one is being floated by DSK’s defense lawyers.]

So, here is where things stand. If the evidence of the keys shows that DSK checked out before the maid used her key to enter the room, or so soon afterward as not to allow time for anything at all to have happened, then clearly the whole thing is a lie, a sting, a put-up job. If the timeline of the keys makes it possible that the accusations are true, but if the electronic evidence shows that the door stood open for, let us say, half an hour, then the maid’s story of DSK shutting her in shortly after she entered the room is false, and possibilities two or three above are suggested. If all of this electronic evidence is compatible with the truth of the accusations, then the question will be whether there any DNA or other physical evidence supporting the accusations. If there is clear evidence of physical contact [not necessarily semen, but possibly that], then either we have an attack or we have “consensual” sex.

That is where things stand until we have more evidence, but I have to say that on the face of it, the story about a sting is pretty implausible.

Incidentally, in all of the French newspaper coverage, much of which now focuses on the superiority of the French over the American judicial system and on the appalling assault on the dignity of DSK constituted by the pictures of him in handcuffs, I was unable to find a single word of sympathy of any sort for the hotel maid. She is a poor, Black, working-class woman, and as far as the sophisticated left wing journalists, academic commentators, and psychoanalysts are concerned, she does not exist.