Gonzalo Sanabria Turns on the Charm 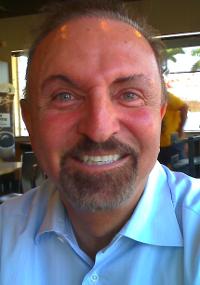 Gonzalo Sanabria unleashed his charm offensive yesterday.   It all began last Wednesday, when I posted about the Coral Gables Commission Group 4 election:  I Just Got Push Polled in the Coral Gables Election.  In it I noted that Mr. Sanabria was one of the two victims of the poll (along with Brad Rosenblatt), but I also said this:

I have no idea who I will vote for, although I know two candidates I will vote against: Gonzalo Sanabria, who seems to represent almost everything rotten about local politics (and thus must be presumed to be the favorite to win?) and Jackson Rip Holmes…

My take on Sanabria was based on a series of postings at Eye on Miami (e.g. this and this), the blog which I’ve found to be most reliable on local politics, especially since the demise of Stuck on the Palmetto.  Imagine my surprise when Mr. Sanabria called me up the next morning and – very politely – asked me to meet him.

We got together at a Starbucks yesterday morning, and the charm began.  He’s pretty good at it.

Much of the conversation was off the record, although I did get on-the-record statements regarding the push poll and the claims it made (see below).  I also got a taste of the Sanabria case for his election, some of which is on his web page, which I take to be a combination of three things:  1) Republican-style politics of cutting payments to workers and supporting development plus “no new taxes”; 2) a technocratic/entrepreneurial claim based on his early career as an economic analyst and later career in real estate; and 3) a dash of Cuban entitlement — pointing out that there’s only one Latin on the Coral Gables City Commission, and saying how about another one, maybe one whose father happens to have had strong anti-Castro credentials and who came to Miami as a refugee at age 12.  Needless to say, only the part about being an economist works especially well for me.   That said, one might expect the package to play well in the Gables — although it didn’t quite work out the first time Sanabria ran for office: he lost by 323 votes to incumbent Maria Anderson.

On the record, I asked him about the push poll. Sanabria started by strongly denying any involvement, and I believe him: indeed who would even suspect a person of paying to push poll against themselves?

I asked him who he thought did it. Other than suggesting it must be one of his opponents, all he would say is, “I find it to be quite disgusting and out of place.”

Would it be OK to attack someone for being gay? A moment’s hesitation, then a firm “No.”

I asked if he had a favorite in the Mayor’s race. But there was no endorsement: “There’s three people and I can work with any of them.”

The push last week poll made four suggestions about the Sanabria record, and I offered Mr. Sanabria a chance to respond to each one.

As member of the Coral Gables Historical Preservation Board, he missed more than 25% of the meetings

I neglected to ask if any of the kids still play sports.

He spent over 100K of his own money running unsuccessfully in what observers called “the nastiest local election ever”.

“I don’t know what ‘the nastiest local election means’. I got attacked viciously, I used my money, my $100,000 so I wasn’t beholden to any influence group. And we still gathered an additional $60,000 in contributions from city residents, taxpayers. This time around I’m not using any of my money.

“…[losing] by 323 votes against an incumbent. I wouldn’t call that ‘unsuccessfully’ — I would call that a pretty close race.”

As for donations in the current campaign Sanabria says the “80% of the contributions are from individuals” and “I won’t accept any money from contractual vendors.”

(In my opinion, however, that’s a little misleading since individuals usually give smaller contributions. The interesting question would be who the largest contributors are and how much they gave. Also, what % of the total is from gifts of $50 or less.)

“I regret it. I regret it tremendously. If I had known then what I know now, I should have paid attention to the community. I was busy raising my family….I apologize for not voting.”

As member of the Miami-Dade Planning Advisory Board he voted at least five times to move the UDB farther west into the Everglades.

“That’s not true. But I did vote and championed the incorporation of eight new cities (Key Biscayne, Pinecrest, Doral, Palmetto Bay, Old Cutler Bay, Miami Gardens, Miami Lakes, Aventura, Sunny Islands).” Mr. Sanabria did say he voted to move the UDB twice, but insisted that in both cases there were very good reasons and in at least one of the cases the land was heavily polluted and would have been no environmental loss, rather a gain as it would have been cleaned up.

And here we get to the heart of the matter. I have no idea what the record on actual votes to move the UDB may be. And Mr. Sanabria insisted several times in our coffee that he has no desire to move the UDB south. But there’s no question that he’s a strongly pro-development figure. People like me who are neither happy with NIMBYism nor happy with unregulated sprawl anywhere, nor unplanned growth in residential areas will not want people on either extreme.

The question is particularly acute in Coral Gables which I think has benefited strongly from tough building codes and tough inspectors. Our buildings generally withstood Hurricane Andrew because we didn’t cut corners or leave out needed nails in roofs. Like many people in the Gables, I have had my issues with Code Enforcement and permitting. It can be a pain. But the overall effect has been to our benefit aesthetically, structurally, and in terms of property values. I think the truly conservative approach here is not to undermine Building and Zoning — a system that, even granting it has the occasional really annoying excess, has usually served us well.

So I still don’t think I’ll be voting for Gonzalo Sanabria. But he can be quite charming.

I missed the first candidate’s forum. I’ll try to make it to the next one — if I can find out where and when it is. These things are NOT well publicized.

17 Responses to Gonzalo Sanabria Turns on the Charm