I'm sure there's a perfectly good reason for this that everyone else knows, and someone will explain it to me, but I was a little surprised by this photo which appeared in today's New York Times accompanying a very straightforward and informative article by Norimitsu Onishi entitled, Indonesian President Is Projected to Win Election, which reports on the early returns in the recent Indonesian election.

Here is the picture: 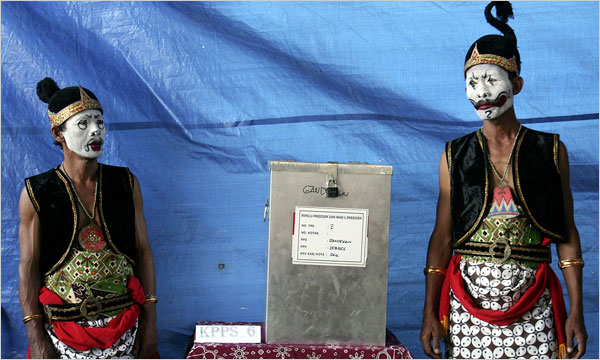 The caption states, in full,

Election officials dressed as puppet theater characters guarded the ballot box on Wednesday at a polling station in Solo, Indonesia.

The New York Times vouchsafes us no explanation in the article, or in the deadpan caption, why an election official would dress up as a puppet theater character in order to guard a ballot box. Is this an Indonesian tradition? A joke? A routine thing?

I suppose it may have some virtue I'm not aware of — there seem to have been fewer problems in Indonesia than in the average Florida election, but even so I'd like to know what's going on here.