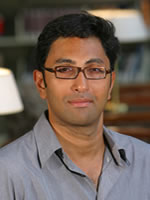 I am particularly pleased to announce that Prof. Kunal Madhukar Parker, the James A. Thomas Distinguished Professor of Law at Cleveland State University, has accepted an offer to join the UM Faculty next year.

Professor Parker was an editor of the Harvard Law Review. Prior to joining the Cleveland-Marshall faculty in 1996, he was an associate at the New York law firm of Cleary, Gottlieb, Steen & Hamilton, where he practiced in the area of bankruptcy law with respect to complex financial transactions. Professor Parker has written extensively in the area of colonial Indian legal history and U.S. citizenship and immigration history and theory. He is currently at work on a book-length project on the emergence of historical context in late nineteenth century American jurisprudential thought. Teaching Areas and Interests: Bankruptcy, Conflict of Laws, Immigration and Nationality Law, Legal History, Property, Race and American Law, Trusts and Estates.

(There's also an online c.v. which reveals, among other things, that he speaks six languages. I can testify that his French is impeccable.)

Prof. Parker has a terrific book (based on his dissertation) coming out soon from Cambridge University Press called “Custom And History: Common Law Thought And The Historical Imagination In Nineteenth Century America.” All indications are that it will be a major book in the field.

When Kunal visited here in the Fall, students loved his classes, and he was a very thoughtful participant in faculty seminars. Given his erudition he is also amazingly modest and generous in conversation.

UM has not historically done a vast amount of lateral hiring, but now that we have a large number of new lines I think we'll be doing more in the future. This is the second major lateral appointment of the year. (Cf. Jan Paulsson to Join UM Law Faculty.) There might even yet be more.