Not Everything That Happens Will Happen Today

Posted on December 4, 2008 by Michael Froomkin 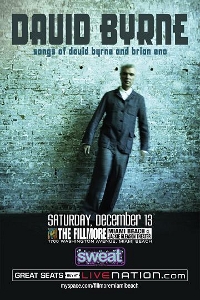 We've got David Byrne Tickets for his upcoming concert at The Fillmore Miami Beach on Dec. 13.

I just hope he sings. Back in '04, something about Miami made Byrne think dark thoughts about fakery …

Down by the lounge and pool, it's a meat market. Artificially enhanced specimens of both sexes stroll the grounds. Even the hostess has enormous breasts. The staff speak in sweet, breathy high-pitched tones — like they’re all little girls. Nothing is real. It’s a shocking change from Mexico, even though I realize many of these folks might have come from south of the border.

The venue, the Gusman theater — one of the over-the-top movie/theater palaces that John Eberson built across the country and around the world — is in the center of town. The State Theater in Sydney and the Majestic in San Antonio are other examples. As in some of the others, there is a vaulted, deep blue sky with little stars that twinkle. Fake classical pavilions create a kind of skyline and serve as outposts for spot operators.

… and this extends to music:

I think if a show has enough spectacle, pre-recorded vocals are permissible. Then the show is not about the emotive and personal power of the singer, but about the flash, the sets, the dancing boys and girls, the cool effects and sight gags. One could also say that the singer might be more easily replaced in these kinds of shows. The singer is a just another modular part, like any of the technicians or dancers.

Despite this, I love reading Byrne's online journal. Miami seems to be the last US stop on the tour, and then there's a significant hiatus until Hong Kong. Perhaps he's staying in town a while?

Hey David, if by some miracle you ever read this, I would love to buy you lunch or dinner — or you can come over for a drink. Who knows, I might not even bore you. If nothing else, I'm probably a little different from the people you usually meet.

(Then again, the guy has obviously thought carefully about online music distribution. So maybe I would be boring…)

This entry was posted in Kultcha. Bookmark the permalink.

1 Response to Not Everything That Happens Will Happen Today