I haven't gotten mine yet, but someone was kind enough to send me a scan of a GOP mailer that is going to houses around here claiming that Democrats want to “surrender” to terrorism. This particular copy was sent right to the heart of FL-18, Annette Taddeo's district.

The content of this thing is pretty ugly. Here's a shot of the worst page. You can click on it for a larger .pdf version of that page. 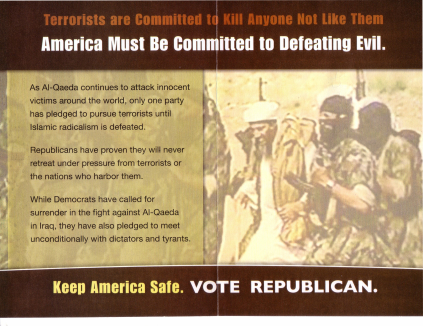 This is accompanied by a smiling photo of Governor Charlie Crist, along with a message warning that terrorists want to kill us, and that we should vote for Republicans to “help keep America safe.” (You can download a .pdf of the entire mailer, if you want.)

Got that? The State GOP, which paid for this thing, and the formerly post-partisan Governor, are saying that Democrats want to surrender to terrorists. Talk about low-class smear jobs…

Does anyone actually think that Democrats want to surrender to terrorism? Most Democrats want to make an orderly exit from Iraq. So, the polls tell us, does most of the country. (And, for what it's worth, during the second Presidential debate it was Obama who took the more bellicose approach towards chasing down bin Laden, not McCain.)

It used to be that we only saw stuff like this in the last week before election day. But the GOP wants absentee ballots, and early voting starts soon, so here we go.

This entry was posted in 9/11 & Aftermath, Florida, Politics: FL-18. Bookmark the permalink.

11 Responses to State GOP Starts the Sliming and Fear-Mongering