Speaker Pelosi came and faced the angry netroots — after we were given a strong lecture by the moderator that if we weren't nice to her, we'd be escorted out of the hall and have our credentials taken.

Pelosi tried to suggest that the House had done all it could to stop the war, which she in effect defined as one bill without war funding. That was pretty unconvincing.

Worse was the line on FISA in which (hiding behind a column by Mort Halperin) the Speaker told us that we had a better chance of getting the truth about illegal wiretapping from the telcos by relying on the Bush administration Inspector Generals in a post-immunity world than we would have from discovery in court.

At the receiving line after the talk, I shouted out that we couldn't rely in the IG's. Pelosi made a face and said, “then we'll have to force the issue.”

But that wasn't the big story of the event. 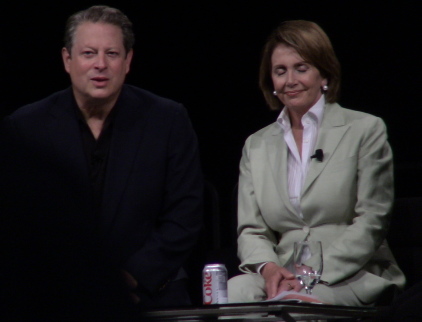 He was great. She was good enough to come, and I still have my credentials.

This entry was posted in Talks & Conferences. Bookmark the permalink.

3 Responses to Pelosi Faces the Netroots