Eric Muller on the “American Inquisition” 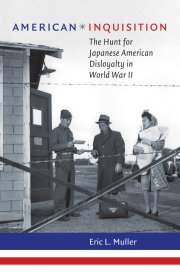 Erc Muller's new book “American Inquisition”: A New Study of the Inner Workings of the Japanese American Internment is being published today, and he'll be blogging about it all week at Is that Legal? and Prawfsblawg.

I'm happy to announce that Monday, October 15 is the official publication date of my new book “American Inquisition:  The Hunt for Japanese American Disloyalty in World War II.”  It's an account of the secret inner mechanisms of racism within the episode we call the Japanese American internment of World War II.

I ground the book in extensive new archival research in the records of the civilian and military agencies that passed judgment on the loyalties of American citizens of Japanese ancestry.  As historian Roger Daniels says, the book presents a new story of “bad news from the good war.”

I'll be blogging about the book's claims here over the next several days.  Today, I'll start things off by offering a very brief account of how the federal government ended up in the business of passing judgment on the loyalty of more than 40,000 U.S. citizens of Japanese ancestry between 1943 and 1945.

Anyone familiar with Eric's work or his blogging will know that this will be a painstakingly careful book — and a good read. I'm looking forward to it.

1 Response to Eric Muller on the “American Inquisition”