Posted on September 10, 2007 by Michael Froomkin 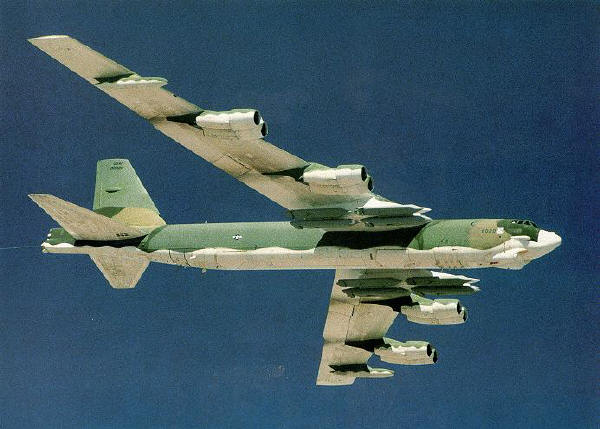 I wrote the other day about the weird incident in which a B-52 flew over the US with five or six live nuclear bombs. (See My That’s a Big Sabre You Are Rattling There)

Strangely, the incident was mostly a one-day wonder to our press, which is now busy worrying about whatever it usually worries about — although you might think that misloading five (or was it six?) bombs — each ten times as destructive as the bomb the US dropped on Hiroshima — might just maybe spur a follow-up story or two.

That’s certainly what the good folks at Nieman Watchdog (where my brother is an editor) think, and I commend Nieman Watchdog > Ask This > A B-52 with six armed nuclear missiles flew over the U.S. for 3-1/2 hours. What’s the story here? to you for a recap of the facts as we know them. And it’s striking how little we know about certain key questions, which Nieman Watchdog thoughtfully provides for any reporter needing a little inspiration:

There are many questions the media should ask about this event. Without answers to them, no one can make positive recommendations for preventing such mishaps in the future.

Q. Why and for what ostensible purpose were these nuclear weapons taken to Barksdale AFB?

Q. How long was it before the error was discovered?

Q. How many other nuclear command and control non-observations of procedure have there been? Is there in the U.S. government a consolidated data base of such incidents so that they could be counted?  Who is responsible for such a data base?  A report for the Center for Defense Information some time ago said President Kennedy was told in 1961 that there had been 60 U.S. nuclear weapons accidents. How many nuclear mishaps have there been since 1961?

Q. What is the U.S. Congress going to do to better oversee U.S. nuclear command and control? Will there be an independent investigation of this mishap?

Q. How does this incident relate to concern for reliability of control over nuclear weapons and nuclear materials in Russia, Pakistan, and elsewhere.

Q. As some news reports suggest, does the Bush administration have plans to attack Iran with nuclear weapons? What does the U.S. Congress know about this, and have they even asked to be briefed?

The last question made me laugh.

This entry was posted in The Media. Bookmark the permalink.