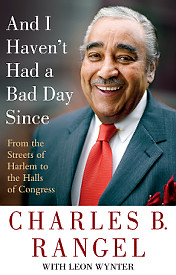 I've long been a fan of autobiographies by second-rank politicians (note that I said second-rank, not second-rate).

First-rank politicians — national leaders — almost always write boring autobiographies. For starters, they often hire someone to ghost-write the book, depriving it of a genuine authorial voice. The traits that made them leaders also tend to make them cautious. They rarely dish the dirt; instead you get somewhat sanitized political biographies of their opposite numbers. They rarely spill the beans; the good stuff leaked a long time ago, or it won't leak for a long time yet. And they are very self-centered: having been the star of the show, they don't usually feel much obligation to tell you a great deal about the supporting cast. There are exceptions to the leaders'-autobiographies-are-boring rule, Julias Caesar and Bill Clinton come to mind, but it's rare.

Far better to read the work of someone who didn't quite make it to the top of the greasy pole. They usually write the book themselves. They understand that they were not the only figure of importance in their times, so they tell us about their bosses (not always in flattering terms), colleagues, and the very good ones paint a portrait of their times.

By this standard, Congressman Charlie Rangel's new book, And I Haven't Had a Bad Day Since: From the Streets of Harlem to the Halls of Congress, by Charles B. Rangel and Leon Wynter, is a good read, but maybe not a great one.

He's at his best telling us about his early life as a silver-tongued near-hoodlum, and his army experiences, including the near-death experience in Korea that changed his life (and won him medals), and inspired the title for his book. He's at his worst describing his love for trade deals which are bad for US workers (he basically doesn't discuss the issue at all).

Rangel’s early history is fascinating, and the story of how an Army veteran and high-school dropout became a law school graduate in record time reflects a breathtaking energy and intellect. The book becomes much less personal as Rangel's life turns more professional. We don't meet his wife until page 179 and we hear nothing about how they met or married. We do hear, in a defensive sort of way, about the defining characteristics of Rangel’s public life: ambition, hard work, playing along with the power structure. It started when he grabbed what had been Adam Clayton Powell’s seat in Congress in part through his relationships with local political bosses. Then followed years playing the game, making friends with New York’s Republicans – to the point where one year Gov. Rockefeller arranged for Rangel to get the GOP as well as Democratic nomination to Congress. Another year, Rockefeller's “birthday present” was a grease pencil and a map – and an invitation to draw whatever lines he liked for his Congressional district.

Rangel is a beneficiary of the seniority system and the boss system, and as he is now at the stage of his career where those things really pay off, he’s a big defender of them. By Rangel’s own admission, most of his personal relationships are professional ones; he writes of Percy Sutton that even though Sutton is one of his best friends, the product of decades of productive political cooperation, they almost never socialize or even eat dinner together. Tip O’Neil is one of Rangel’s heroes, and it’s clear that Tip knew how to keep Rangel sweet

He never, ever took a congressional trip without inviting me.

We came from a world where ethnic urban pols come up poor and climb the ladder of opportunity through public service, doing what they have to do to care for their families, and their neighbors’ families, going along to get along and waiting their turn for the power to advance their community’s interest. Except that, in the Congress, I didn’t really have to get into line and wait my turn; Tip kind of pushed me to the front of the line. And even if he didn’t, most people thought he did, and treated me better for it.”

Rangel’s book is great on Iraq – he thinks it’s a crime, and supports a draft in order to make the rich and powerful have a greater stake in war-making which he, quite plausibly, suggests would be less frequent if the sons and daughters of the middle and upper classes were more likely to be be at risk. He’s good on the failures of Bush tax policy, although surprisingly light on details – this is more a personal history than a manifesto As such, the book is great on his early life, and also interesting on the middle of his career; the present is somewhat cagey, being limited by a publication date in which Rangel’s long-coveted chairmanship of the House Ways and Means Committee was in sight but not in hand.

But at the end of the day, Rangel comes off as interesting, driven, and thoughtful about some issues — but also very much and unapologetically a part of the machine. This boy from Harlem made it to the heart of the establishment; he may not have forgotten the people he left behind but he has no interest in rocking the boat too hard either.