Bill Clinton came to town Thursday and gave the Spring Convocation address. It was a great performance. And given that Al Gore came by a day earlier and presented the “Inconvenient Truth”, it's been a busy week. 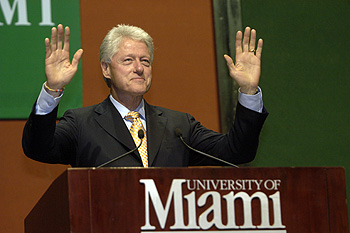 Clinton's facility with language and his ability to persuade an audience of his passionate belief never fails to impress, and today was no exception. (The audience interrupted with applause more than twenty times.) He spoke for about 45 minutes, then sat on stage in a nice upholstered armchair next to UM President Donna Shalala and answered some student questions that she had pre-selected. 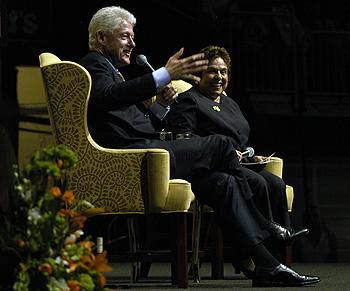 Clinton's main talk, which he said was an abbreviated from of a lecture he's been giving around the world, centered around five questions that he said everyone should try to answer for themselves (everything that follows is summary or close paraphrase; but it's not necessarily actual quotation unless I use quote marks):

1. What is the fundamental character of the 21st Century?

Both. Many benefits – diversity, variety, exchange of ideas, economic development for the third world. But also some “not-so-good” aspects including (1) It's unequal: great inequality (e.g. one billion people living on under $1 per day)
(2) It's unstable: we may actually be less vulnerable today than in the 20th Century, but with modern communication/life more people feel the effects of hijackings and bombings
(3) It's unsustainable: climate change is ongoing and we are depleting critical resources including water, soil, biodiversity, oil & natural gas, fisheries.

3. How should we change it?

Work from interdependence to integrated communities – work locally, nationally and eventually internationally. “The humanity we share … is more important than our differences”

First, we need a security policy in a dangerous age.
Must deal with climate change. Climate change and avian flu are security issues.
Also need to understand that it is “never possible to kill, jail or occupy all of your adversaries.” (Applause)
Third, need a world with “more partners and fewer enemies” (Applause)

Here Clinton cited North Korea, [where the current administration has just conducted a return to a Clintonian policy] as an example of the advantages of talking.

Diplomacy, he said, is “always cheaper then going to war” (Applause)

Clinton then told several stories about making friends and doing good abroad: bringing aid to Indonesia after the tsunami, causing US popularity which had been much lower than bin Laden's rise to eclipse him. (Applause) And about fixing broken markets in pharmaceuticals that allowed Indonesia to cut its spending on essential medicines.

But, Clinton warned, it's not just foreign countries that need aid or need to het their houses in order. We also need “home improvement” or many will “wonder why we are taking care of others and not of our own” (Applause).

Everyone. Everyone should give time or money as they are able (Applause)

President Clinton then detoured into a personal discussion of his role reversal with Senator Clinton (there was only very scattered applause at this point). She got elected just as he left office. I've become part of the NGO sector.

One project he's pursued is lowering drug prices for the third world: in the Bahamas he was able by presenting suppliers with data about prices elsewhere to get them to lower costs for a year's worth of generic anti HIV drugs from $3500 to $500. And in time, to $140 then $100 per year. Markets, he said, were not functioning properly. By arranging for purchases in bulk, by guaranteeing payment [and, he implied, by being Clinton], his foundation was able to get large price cuts. Similar successes in Rwanda and Malawi. The foundation will help buy drugs in many countries, but if they want more help, they must agree to strict structural conditions so aid will not be wasted by corruption or inefficiency. 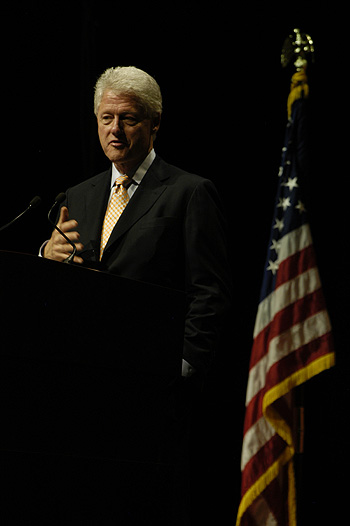 [If I have the time, I'll try to write up the second half of the presentation, the Q&A, some time tomorrow.]

1 Response to Still a Rock Star