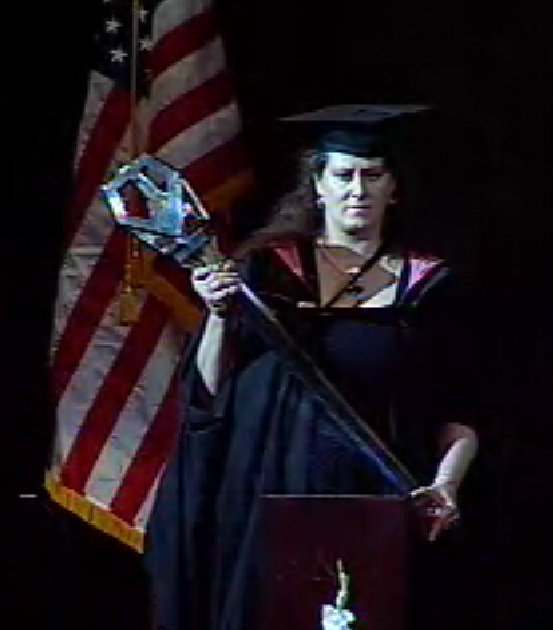 In several ways, this may have been the best commencement since I got to UM.

First, Caroline looked suitably imposing carrying the Law School’s modernistic mace around the Convocation center. Our kids, who followed along on the web cast, said she looked like a ‘level 500 warrior princess wielding an Elven mythril heavy mace’ which sounds about right.

The law school has a tradition of asking a graduating student to sing the national anthem (in English, at least so far). This years’ performer could have been the best ever.

The same might be said about the commencement speech by Anne-Marie Slaughter, the Dean of the Woodrow Wilson School of Public and International Affairs, which you can find (regrettably in ALL CAPS) on her blog under the title, Commencing on the Right Foot. If it wasn’t the best in a decade or more, it was certainly up there.

But perhaps the best part was that I managed to distribute almost my entire supply of “Support the Students” buttons, which means that considerably more than half of the faculty attending wore them, a number well exceeding my expectations. It was nice to see the faculty (relatively) united. President Shalala did not seem that pleased, but she had the good sense not to say anything … although one faculty member told me that the President wouldn’t speak to her when she had one on.

As for the invocation? Well, it was less dull than usual…but it didn’t mention the union or the students.

This entry was posted in Law School, U.Miami, U.Miami: Strike'06. Bookmark the permalink.