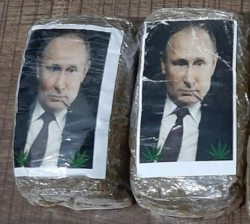 Given the nature of the propaganda war around the real and tragic war in Ukraine, and given especially the bizzaro nature of President Putin’s televised ‘live’ (but really on tape) pre-war meeting with his nervous and bemused Security Council, I’ve been thinking it was only a matter of time before someone tried spreading a rumor that Putin had syphilis or something.

I was close: Comes now China Talk, a podcast and newsletter by Jordan Schneider, who describes himself as a China tech analyst at The Rhodium Group, host of Lawfare’s ChinaTalk Podcast, and a fellow at the Center for a New American Security.

The latest edition features Chris Miller, an Associate Professor at the Fletcher School at Tufts. While talking with Prof. Miller, Schneider says this,

Jordan Schneider: It wouldn’t surprise anyone right now if Putin was on drugs. No doctor is going to say he should cut back a little bit if Putin asks for sleeping pills.

…. Putin’s starting a world war apparently because the entire nation is ruled by drug addicts.

It would not surprise me at all if we end up finding out five or 10 years later that this is the case.

This entry was posted in Ukraine. Bookmark the permalink.