France Should Not Have Been Surprised by Australia-US-UK Sub Deal?

Posted on September 29, 2021 by Michael Froomkin 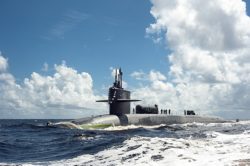 The news has been full of French anger and petulance over the US swooping in and stealing its sub deal with Australia.  French anger has been described as a combination of loss of a deal (the French, I suspect, are more used to stealing other people’s arms sales than having the rug pulled out from under theirs) and the sense that their Pacific Ocean/Asia policy has just taken it on the chin.  Most US news coverage has operated in the frame that the news of the US sub deal came a surprise to France, thus motivating the somewhat, er, energetic reaction.

For this reason, I was intrigued to see a very different narrative offered by the blog Balding’s World. I can’t endorse it, or this analysis, as it’s not my area, but this certainly isn’t what I’ve been seeing in my newspaper or my news feed:

First, this appears to first and foremost be a commercial and bilateral dispute between France and its naval construction company and Australia. Despite the best attempts of France to broaden it to a European or Asian coalition dispute, there is little evidence this is happening. The commercial dispute stems from disagreements over progress, cost, and strategic importance of the subs France would be building. While France has talked about compensation, reports state, and I would be surprised if it was otherwise, that there are clear exits within the contract that do call for specific compensation but are clearly defined by time and work product. Despite what France may say, there is little strategic change from France opting out of cooperation with Australia, the UK, or US to the Indo Pacific region. It would of course be better if they joined the burgeoning coalition but there is little downside risk to them leaving.

Second, this break up appears to have been a long time in the making. While France may claim they were completely blind sided by Australian discontent, there were public reports of meetings at the highest level going back years about Australian discontent. The most recent in June gave the French side until September (now) to turn around the project. There were issues of massive cost increases, the strategic value of the dated subs by the time they would be delivered, delays in delivery, technology transfer, and how much would be locally produced in Australia just to name a few. These are just the issues about which there are public records. This should not have been a surprise.

Third, one widely overlooked point is how much the broader geopolitical landscape has changed from when this deal was first initiated. Signed in 2016 with likely years of planning before hand, for simplicity sake let us assume 2012 when Xi Jinping came to power, Australia finds itself seeking very different naval capabilities from 2016 to 2021. That is not France’s fault that is simply the reality. An underlying factor here is Australia believing they needed significantly greater capabilities than the French models offered.

Fourth, the reports are that Australia initiated the conversation seeking merely to do a basic swap out of the existing class of subs they would purchase from France for US/UK models. However, it quickly evolved into a significantly broader and more significant upgrade of Australian naval capabilities. There are a couple of sub reasons this is important. For instance, this appears to be a coalition of the willing of 5 Eyes essentially becoming 3 Eyes with increased security integration and access to resources. This is building out a coalition of countries willing to cooperate with an eye towards China. Additionally, this (and I should say this is somewhat speculative) appears not to be the Biden administration jumping in to try and snag a deal but rather being approached and putting something together to work with an ally. The reason that matters is that I would not expect this to become a pattern of hard ball real politik for the Biden administration. I would hope I am wrong and that they would do more deals like this but I doubt that is likely. One final sub note is that the exact timing remains somewhat unclear here so if I am wrong, I will gladly correct. Some reports have talks on this commencing 12-18 months ago and some have the talks initiating 6 months ago. For something of this complexity, I’m guessing 12-18 months ago but that would again provide different implication in that the Biden team is receiving a hand off and sealing the deal rather than managing the deal themselves front to back. Again the details here remain a little murky but something to watch.

Fifth, it is very hard to see French complaints. The business case was pretty clear for quite some time that Australia was very unhappy with the project. When, as it appears, Australia reached out to the US and UK, they brough much larger, broader, and deeper resources to the table to help Australia. On a strategic level, though France is talking of multilateralism, it needs to be emphasized that they are using that word very differently. They have pointedly refused to join the US and other countries in seeking to challenge China preferring almost a more go it alone strategy that has hall marks of the US, UK, and Australia but pointedly not joining with those countries over China. They have actively sought to increase trading links with China through among other initiatives as the CAI to the consternation of the US and even the Parliament. Now France is a sovereign state and pursue whatever policies it feels are in its interest but when your entire foreign policy is labeled “strategic autonomy” it is difficult to take seriously calls for a return to multilateralism.