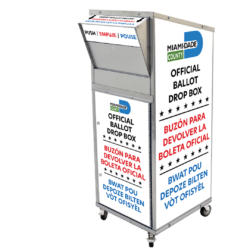 Apparently, “Of the 627,484 Miami-Dade voters who had absentee or vote-by-mail ballots mailed to them as of Wednesday, a little more than 142,000 have mailed them back. That means that more than three times as many — a total of almost half a million — are still sitting somewhere on kitchen counters, home desks, nightstands and dining room tables from Homestead to Hialeah.”

Speaking as one of those voters, I can tell you what I’m thinking: I’m planning to drop off my ballot in a secure, official, not-California-style dropbox early next week.

Why next week and not now? Because early voting doesn’t start until Monday, and the dropboxes are only available at early voting sites (or way downtown at the Board of Elections).

Incidentally, there are some moderately strict rules about how a vote-by-mail ballot may be returned:

Vote-by-Mail ballots must be returned as follows:

To track the status of your vote-by-mail ballot, go to https://www8.miamidade.gov/elections/votebymail-status.

This entry was posted in 2020 Election, Miami. Bookmark the permalink.