Every Grift Great and Small

Posted on December 1, 2019 by Michael Froomkin 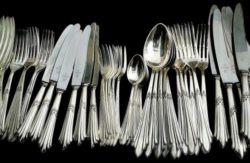 Daily Kos is publishing excerpts from the Anonymous book on life inside the Trump administration.  This little bit is arresting, although there will it seems be no arrests:

Donald Trump cannot not do crimes. It is not possible for him. Early on in the administration it became apparent that he was pocketing the official White House silverware after every meal served to him. It is not something the staff was willing to challenge him on, so it has continued after every meal, every week, since the inauguration. Nobody had the slightest idea where he had been squirreling them off to until the cleaning crew discovered a sack underneath the bed in the Lincoln Bedroom containing literally hundreds and hundreds of stolen knives, forks, and spoons. Does he intend to take them with him when he leaves office? Does he take them just to prove he can? Nobody knows, and none of us want to.

Not I suppose a high crime or misdemeanor, at least until he takes them out of the White House, but sooo weird.

2 Responses to Every Grift Great and Small