Posted on September 17, 2018 by Michael Froomkin

UM did fine; the news is the crash over at neighboring law schools, notably Nova Southeastern, Stetson, and Barry. What happened? (In reading this list I would not read much into small differences in pass rates; but big differences (over 10%, maybe; certainly over 20%, and likely less) do mean something.) 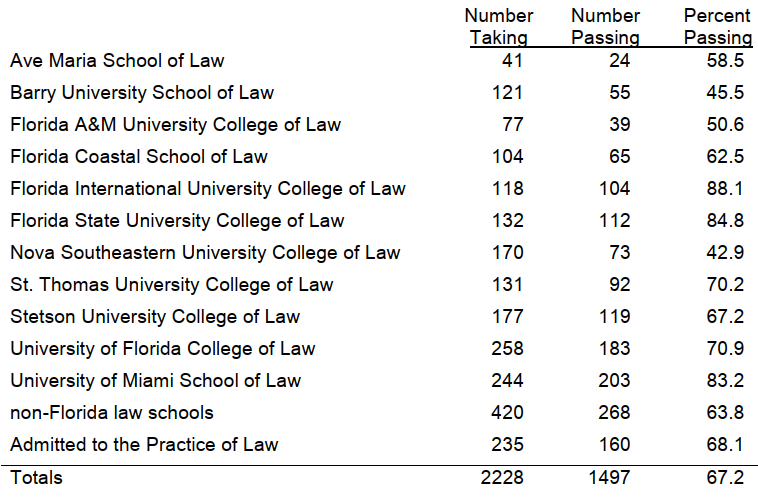 This year’s bar was tough, with the lowest pass rate on the multistate in 34 years. In that environment, UM’s 83.2% is credible, given that we have a lot more bar-takers than our close competitors, even if it is still lower than I would like.

Stetson, once the #1 or #2 in the State, and  at least  in the high 70s or low 80s less than 10 years ago, was 76.8% last year, and suffered less this year, but it was down to only 67.2%. These are schools that are (were?) known for solid teaching of doctrinal law, for producing reliable local practitioners year after year, if perhaps not for being national or especially academic in their ambitions.  Barry, which not long ago was comfortably in the mid-70% range,  and got 58.9% last year, cratered too, to 45.5%. Indeed both Barry and Nova were below Florida A&M, and FAMU’s 58.5 score wasn’t much to cheer about.

There won’t be much happiness at the University of Florida. They have a fine program, and students with excellent credentials, and yet only 70.9% passed? A blip, I trust.

I’ve long said that Bar pass rates are over-rated as a measure of law school quality. But, as I also said back then,

[T]here certainly comes a point where a substantially lower bar pass rate than other schools in the state is a sign of a problem that a law school should work to fix. Most people come to law school in order to become lawyers. If they can’t pass the bar, at least on second try, in most cases they have wasted large amounts of time and money. If this is happening to a substantial fraction of the class, and it isn’t happening nearly as much in other law schools in the same state, then something is wrong either with the teaching, the work ethic, or with the admission policy. Note that the latter may not be the school’s direct fault: as there are more and more law schools it becomes increasingly likely that some schools simply are unable to attract enough students with enough discipline or talent, which puts pressure on the school to either teach to the bar, or to flunk a greater fraction of the entering students.

I’m not sure where that point is exactly, but surely a 42.9% pass rate is below it, and probably 62% also, unless the school is self-consciously taking risks on admissions in order to further a social goal (which arguably describes FAMU) — and the students understand this going in.

I’m glad we as a school did well; I feel sorry for everyone at every school who tried hard and failed. Anyone can fail the bar once; many of you will pass on second try, if you work hard again.

This entry was posted in Florida, Law School. Bookmark the permalink.