In France the Center Didn’t Just Hold — It Crushed

Meanwhile, in France, President Macron’s new party, the LREM, crushed its rivals on both the right and left.

This picture is amazing: 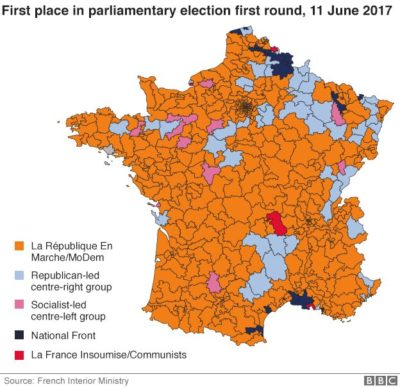 Ahead in 400 constituencies out of the 577 that make up France’s National Assembly, the party is heading for a convincing majority far higher than the 289 seats needed to control parliament. That does not even take into account the 100-odd seats where Mr Macron’s centrist MoDem allies are in the lead.

His centrist alliance could control 415 to 455 seats after the second round on 18 June, experts predict.

And many of them are political novices, so this could get interesting.