Can’t Make This Stuff Up 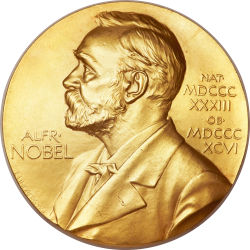 “So they opened it up and they said, ‘What’s it made out of?’ I said, ‘gold.’ And they’re like, ‘Uhhhh. Who gave this to you?’ ‘The King of Sweden.’ ‘Why did he give this to you?’ ‘Because I helped discover the expansion rate of the universe was accelerating.’

“At which point, they were beginning to lose their sense of humour. I explained to them it was a Nobel Prize, and their main question was, ‘Why were you in Fargo?’”

– Daily Telegraph via View from the Wing.

This entry was posted in Law: Right to Travel. Bookmark the permalink.