I’ve been hearing about this billboard, which is apparently very visible on I-95. 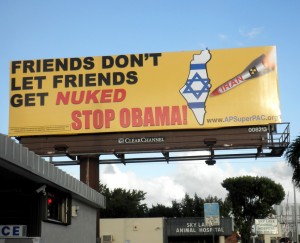 The billboard is paid for by APSuperPAc.org, the crazy people who also endorse Alan West. I suspect, though, that fear-mongering like this works, at least some. More about Obama’s Jewish support in Florida from the Palm Beach Post.

Personally, I think “kick the ball down the field and hope that ultimately, somehow, something will happen and resolve” the Middle East Romney will be bad for Israel. Anything that emboldens Bibi to be worse than he already is cannot end well. There likely will be another war. And many many casualties on both sides.

Sometimes a true friend is the one who keeps you from doing something rash.

This entry was posted in 2012 Election. Bookmark the permalink.