Humorless Border Police. Where Have I Seen That Before? 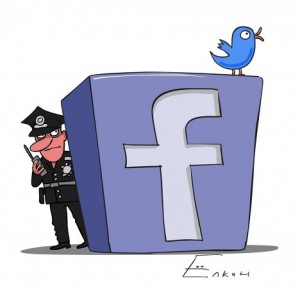 The Department of Homeland Security flagged up Leigh as a potential threat when he posted a Twitter message to his pals ahead of his trip to Hollywood.

It read: “Free this week, for quick gossip/prep before I go and destroy America”.

He was also quizzed about another tweet which quoted hit US comedy Family Guy and said: “3 weeks today, we’re totally in LA p*ssing people off on Hollywood Blvd and diggin’ Marilyn Monroe up!”

Agents even checked the pair’s cases for SPADES and suspected that Emily was to act as “lookout” while Leigh raided the film beauty’s tomb.

Serious note: I suppose once seized of the information about the first Tweet the decision to detain and question cannot be said to be absurd. The decision to jail and deport on the other hand does seem quite absurd.

And why are we spending the money to monitor all future UK tourists’ tweets? Obviously because we know that terrorists have a propensity to announce their plans on Twitter. In English. Stands to reason, really, given that Twitter is (or was) a tool used by revolutionaries….

Image from Negotiation is Over.

This entry was posted in Civil Liberties, Law: Right to Travel. Bookmark the permalink.

1 Response to Humorless Border Police. Where Have I Seen That Before?