I Went to a Party

Posted on November 21, 2009 by Michael Froomkin

Here's what I did this afternoon: 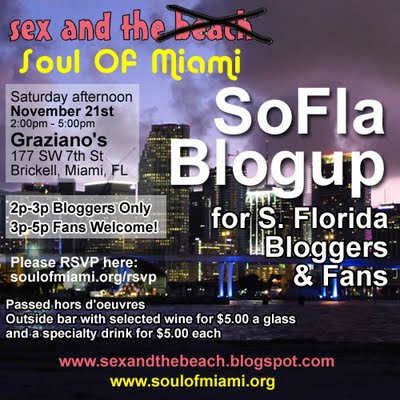 More details at Soul of Miami and Sex and the Beach.

It was a good party – met Mustang Bobby and saw the Miami Beach 411 crowd — always the life of the party. Plus I met the Genius of Despair (but not, alas, Gimleteye, with whom it seems I may have a few things in common.

There was a loud band, which I would enjoyed more under other circumstances. The folks at Graziano's were pouring lethal rum-and-cokes; I haven't seen ratios like that since college. One glass and it was canapes for me, trying to soak up the booze. And they were good canapes too, especially the beef. I've only ever been to the Graziano's on Bird Road, which I recall for excellent, if pricey meat. Judging from the samples, the excellence is repeated at the Brickell location.

And then I came home to watch the taped second half of the UM game. But the DVR stopped taping with only a few minutes left in the game. I saw the bad call(s) that deflated Duke. I saw Berry run and and run and run to score. And I saw Hankerson pull it in. But apparently I missed a great interception and scoring run by Sharpton. At least it was on the ESPN highlight reel.

This entry was posted in Blogs. Bookmark the permalink.