A far-right, Barack Obama-hating Baptist preacher had a bad encounter with the Border Patrol and made a video about it: Baptist pastor beaten & tazed by Border patrol – 11 stitches.

Maybe the guys who who beat and tased him were operating under advice of counsel? (But seriously, I bet it's only a matter of time before Fox or someone says this is proof that Obama is Hitler or something.)

Don't use this as a model with how to deal with a traffic stop: If law enforcement tell you you're under arrest — which must have happened at some point, although when isn't clear — one should get out of the car if told to. Or even if told to before arrest. Sue them later. (It's ok to ask if one is required to do so or if one is free to go. But if the officer says you're required to comply, do so — and get their name.)

And, even absent arrest, if there's probable cause for a search — like a dog alert — then law enforcement have the right under current law to search the car. Problem here is that there's a fairly credible allegation that the 'dog alert' may have been a fake. As the law stands, however, that doesn't give one a right to resist arrest. It sure sounds like it would have been wiser to get out of the car one the police showed up, at the latest. But it also sounds like despite the Pastor's charming belief that the 4th amendment applied, or would have protected him even if it did, there were several unjustified acts that could serve well for claims of police brutality.

Why do the “Border Patrol” get to set up checkpoints 75 miles from the border? Because in United States vs. Martinez-Fuerte, 428 U.S. 543 (1976), the Supreme Court said they could go up to 100 miles from the border. Which includes pretty the entire state of Florida, since most of it is within 100 miles of the coast! 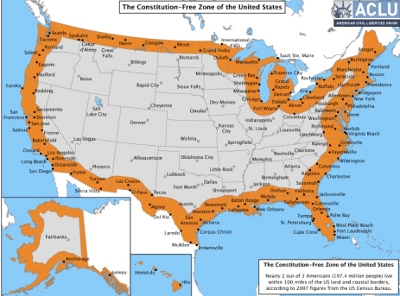 It's not just a Florida problem. Here's the ACLU:

Much of U.S. population affected

This entry was posted in Civil Liberties, Torture. Bookmark the permalink.

2 Responses to Another American Radicalized