I took the car into the shop on Wednesday. In the uncomfortable waiting room, an older guy who was waiting for his repair was going on and on and on about how awful all politicians are — they should all be shot — and especially how awful the administration's economic policies are.

I argue that there's plenty of room to criticize the timidity of administration's economic policies — why bail out zombies instead of starting fresh, clean, government run banks and privatizing them eventually? — but that wasn't the substance of grandpa's attack. No, he was talking about the biggest government spending in history, that 'massive' stimulus bill. It was Hoover all over again. I couldn't get him to believe that government spending wasn't at an all-time historic high in percentage terms.

As it happened there was internet access there, so I pulled up this graph and tried to show it to him: 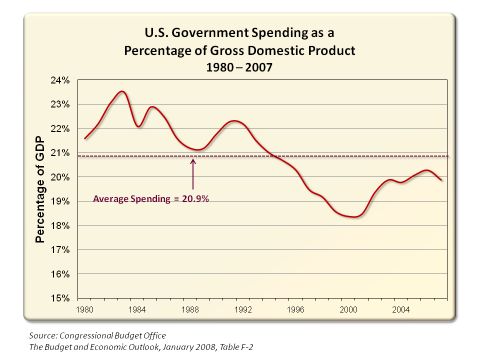 But I literally couldn't get him to look at it. “I don't want to argue with a know-it-all,” was his reaction. In other words, “No Facts Please, We're George Bush's Americans.” And when I told him the table had been produced by the US Government, that just iced the cake, “Well, the government,” as if anything they said couldn't be believed.

Some ignorance is impregnable. But I'm putting the chart here for easy reference the next time the car needs work.

And for good measure, here's a link to a chart I found, The Audacious Epigone: Government spending as a percentage of GDP by country which suggests that the US is number 144 of the 160 countries surveyed for government expenditure as a percent of GDP. I'm a little suspicious of this number, since I think for true comparison one should include all state/provincial spending in federal systems, but there it is.

This entry was posted in FAQs. Bookmark the permalink.

9 Responses to Budget Deficits In Perspective