Posted on November 4, 2008 by Michael Froomkin

If you are a US citizen 18 years old or more and have not yet voted you really should do so.

I hope that this is the most important election in a generation; I fear that may have been 2004.

Barack Obama was not my first choice in the primaries, but he has run a truly admirable campaign on multiple levels, and he has earned your vote the hard way.

The most admirable aspect of Obama's campaign has been its organization, both internally and externally. A disciplined staff, a clear and consistent message (right down to the typography and iconography). Smart use of both old and new media. Restrained and modulated use of an incredible gift for oratory. Mass organization of volunteers all over — all over — this country.

The next most admirable aspect of the campaign has been what it has shown us about the candidate: thoughtful, disciplined, decent, very intelligent, and politically canny. What he lacks in experience he makes up for in book smarts, street smarts, and a worldview that this a product of a cosmopolitan, multi-racial experience blended with close study of issues.

On balance, this canniness is an asset in a President. Those who lacked it — Carter comes to mind — were soon roadkill. But the canniness comes at a price, and that price is seen in the third most admirable aspect of the campaign, and that is its policies. Make no mistake: Obama's policies are much more likely to improve the lot of the average American than McCain's continuation of trickle-up economics. Obama's health plan will protect millions more people. Obama's commitment to technologically enhanced openness in government seems deep and sincere. I hope he will close Guantanamo; I'm certain he will end US state-authorized torture.

But…the health care plan has holes. They're canny holes — they allowed Senator Obama to describe the plan in terms that made it seems nonthreatening to those looking for something to be threatened by. And that may in fact be only way to pass something large. I'm prepared to believe that. Less easy to swallow was the ducking on FISA. Again, the politics are clear; but here the price is essential principle. And I'm still waiting to see some “clean coal”. Again, canny. But at a price. I could go on, but you get the idea.

The least savory aspect of the Obama campaign was its embrace of the role of money in politics (there's that canny again). On the one hand, the money came from people, not PACs. But on the other, the incredible sums raised and spent seem all too likely to open the door wider to future corruption of the process by the relentless demands of fund-raising.

In this campaign, Obama has managed to connote JFK, FDR, Reagan and Lincoln (and maybe Constantine I, too), sometimes all at once. Heady company indeed. Each great, each with real flaws.

Senator McCain, in contrast, has embraced his inner Atwater, and run a campaign that is most kindly described as reckless if not desperate, and more cruelly if accurately described as irresponsible and ugly. It has lurched from theme to theme, and few of them have made much sense. Ready, shoot, aim is not a good method for a President. And the McCain's campaign inability to execute on either simple matters or major ones (Sarah Palin) suggests that whatever the value of his various experiences it does not translate well into management, and that indeed the Senator is more maverick than statesman, more gimmick than leader. The decision to focus on innuendo and character assassination rather than substance may have made tactical sense, but it served the nation poorly. McCain ran a campaign without honor and with little substance. And when there was substance, it wasn't detailed, wasn't convincing, sometimes wasn't coherent (especially as regards the economy). McCain's one clear policy — foreign policy belligerence — is appropriate neither to times nor to our diminished capabilities. The signs point to only one conclusion: for whatever reason, be it age, the corruption of ambition, or the real man exposed at last, as a President John McCain would be as bad as George Bush and in some ways worse.

This country has been mis-governed hideously for the last eight years, and erratically for many years before that. The task of reform is too great for any one man. It requires a leader who can attract a strong team, give it its head, and can lead — yes, that sometimes mean persuade — a nation. 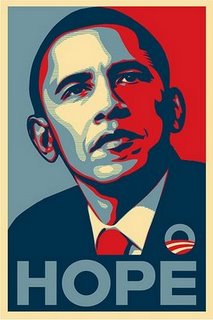 To succeed, the new President will need a Congress that is not in the grip of obstructionists bent on destroying him and exterminating any progressive opening that he might represent. So don't forget the rest of the ticket, please, either.

1 Response to VOTE! (Preferably for Obama)