Off to Netroots Nation

Once upon a time, I used to do a lot of local politics. I worked as a young intern in the McGovern campaign (not the world's most organized organization). In high school, I volunteered for the late, great Mo Udall, the best President we never had. In college I was one member of a small committee that set up a state office for the primaries for an underfunded Presidential candidate in Connecticut — without his approval (they eventually sent an actual staffer to take over). Just after I graduated from college, I was the press secretary for the Ira Lechner for Congress (VA-10) campaign (we got clobbered by Frank Wolf in the Reagan landslide). Later, while a first-year law student busy not crossing picket lines at Yale, I ran phone banks for Bruce Morrison for Congress (CT-3); he got re-elected, making it one of my few winning campaigns.

Then I lived abroad for long enough to lose many of my local political ties; when I came back to the US it was to a new and strange place, South Florida, where serious politics seemed to happen in Spanish. And I had other things to worry about: hurricanes, children, tenure, life. So I didn't do much beyond the armchair.

George Bush has (re?)radicalized me. And once again, I'm doing a little activism. This time, I'm helping out one of our wonderful local Congressional candidates, Joe Garcia (FL-25). (Our other great local candidate is Annette Taddeo (FL-18), but we've got that covered too, in a different way: my older son, age 14, has been interning at the Taddeo campaign office, and he's coming too to help Annette and her staff.)

When I called Joe to volunteer, he first asked me to look over his web presence and see if anything needed improving. That wasn't hard, it was pretty good already. Then, when Joe came over to breakfast to get my report, I asked him what else I could do for him.

I figured he'd ask for money, and was even braced to do a fundraiser, although it's really really not my style. But he surprised me: Joe asked me to go with him to Netroots Nations and introduce him around to the other bloggers. I tried to convince him that I don't actually know most of them, except by email, but he seemed to think that would do.

So Thursday, I'm going to Netroots Nation (formerly Yearly Kos), to act as a sort of advance man for Joe Garcia. Perhaps I'll see you there? If so, there's this great candidate you might like to meet… 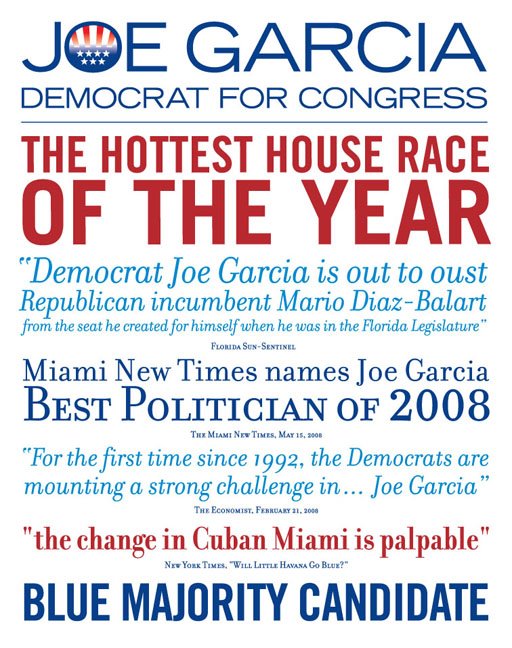 (Poster from Miami & Beyond.)

If you won't be in Austin for the conference, you can follow along online in Second Life. See NNinSL.org for details. All the main events will be streamed and they also promise inworld parties and special events. And, unlike the meatspace version, this one is free.

This entry was posted in Politics: FL-25/FL-27, Talks & Conferences. Bookmark the permalink.