We're having an election this Tuesday here in Miami-Dade County. Indeed voting started several days ago. But you'd hardly know it from the coverage, which until the last couple of days has been almost non-existent, and still remains quite light.

Voter turnout is expected to be minimal. Yet the issue — who should hold the whip hand over the top officials in the county bureaucracy and thus have effective control of major decisions in s spending and public policy — is an important and difficult one. We currently enjoy (if that's the term) a 'weak mayor' form of county government that gives the County Commission great power to hire and especially fire major county bureaucrats, including the county manager, and the people who run the airport, the schools, the housing department and so on. It's fair to say that the performance of many of these departments is poor on good days and frequently appalling. And in my opinion perhaps the biggest reason for the unacceptable level of incompetence, cronyism, and corruption is the influence of patronage and influence networks (or, if you prefer, patronage and graft networks) in which the members of the county commission figure prominently as ringleaders or beneficiaries. Not all of this is illegal; some of it involves legal graft, called campaign contributions. Some of it is even the dysfunctional result of sincere attempts to achieve various policy outcomes, something which around here seems to produce disorganization when originating from a multi-member body.

Given the mess, three's an enormous temptation to say change, any change, surely must be to the good. Unfortunately, there are also some reasons to fret about what a 'strong major' would be emboldened to do. While the incumbent mayor strikes me as more honest and competent than the dominant faction on the Commission, this is far far from inevitable. And the long-run political implications are not ideal either — the county Mayor becomes a significant political force in the state, which given who they have been is not all that attractive a prospect.

As you might expect, the public debate, to the extent we are having one, has little to do with the real issues. There's a danger of the Mayor doing a lot of bad things; it's hard to imagine him stealing more than the current crowd, if only because there's only one of him and many of them.

As I mentioned, the campaign has been surprisingly invisible. So far, I've gotten exactly two pieces of direct mail in this election. Both came yesterday, and both are from the anti-amendment faction, the people who want to keep the status quo in place, one characterized by cronyism, corruption and inaction by the Commission. Not that you'd guess it from this classic piece of Rovian-class projection. I'm posting small images below; each is a link to a larger .pdf image. 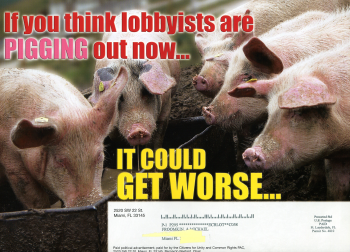 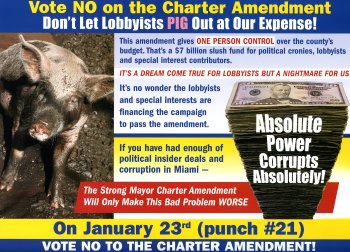 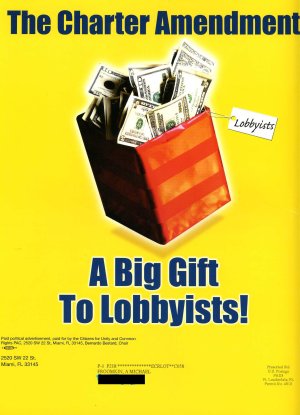 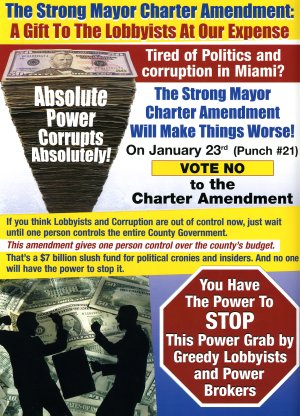 As I said, the mailers are something between hilarious and dishonest, since at present it's the Commission that is more implicated in the corruption infesting the county bureaucracy.

To see what some other local bloggers are saying (they're pretty much all for the charter amendment), see:

Some of those authors express reservations, ones which I tend to share, but even so on balance I think I'm for it. The Commission has failed to meet too many local challenges. (Over?) centralizing responsibility will at least make it easier to know exactly who to blame.