Posted on September 27, 2006 by Michael Froomkin 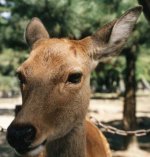 The story begins a couple of days ago, when a former college teammate, R. Kendall Shelton, now apparently a respected radiologist in North Carolina, told an almost incredible story about how he and Allen and another teammate had gone deer hunting, and,

After the deer was killed, Shelton said, Allen cut off the doe’s head, asked for directions to the home of the nearest black person and shoved the head into that person’s mailbox.

“I have no doubt George was a racist in the early 1970s,” said Shelton, who described himself as a former Democrat who is registered as an independent. “I couldn’t care less if George was a Democrat or a Republican. He shouldn’t be in public office.”

Others who knew Allen in the same era have come to his defense, although most have current ties to him or the GOP. Still others are, apparently, afraid:

Two other former U-Va. athletes also said they recalled Allen using racial epithets frequently in college. They spoke on condition of anonymity, saying they feared the effect of coming forward on their livelihoods and families.

The deer-in-the-mailbox story has radicalized a hitherto apathetic segment of the citizenry: the people most likely to open a mailbox. Allen is now in the sights of Letter Carriers for Truth.

Stick a fork in him?

This entry was posted in Politics: US: 2006 Election. Bookmark the permalink.