The NY Times had a story a story on Javed Iqbal, the al-Manar ‘Terrorist TV’ Case, with a stunning photo of the defendant’s back yard. With eight big satellite dishes, it’s safe to say this wasn’t a covert operation! 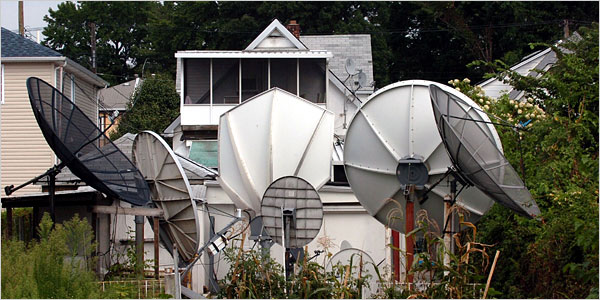 There’s a follow-on today, which notes that Mr. Iqbal is a Pakistani who has lived here for two decades.

I’ve been sent a copy of the indictment. It’s quite a surprising read: the sole charge is conspiracy to violate IEEPA, with the providing of the TV services being charged as the overt acts in furtherance of the conspiracy. This is either desperate or clever on the government’s part, or maybe just evil. Let me explain.

The indictment doesn’t say what the government alleges the conspiracy’s actual ultimate plan might be other than that it violates IEEPA. The selling of access and actual provision are not alleged to be actual crimes, but are just described as the overt acts in furtherance of the underlying (unspecified) conspiracy. The co-conspirators are said to be “others known and unknown” but no actual names are provided save those of the people involved in what appear to me to be the legal acts — at least insofar as IEEPA is concerned –of providing TV signals.

I am not a criminal law expert, but it’s pretty basic crim law that you can’t be convicted of conspiring to do something legal. You don’t actually have to comimt a crime, but one of your co-conspirators has to have had illegal plans of which you were a part. And what that illegal thing might be other than the service provisioning and installation isn’t visible from this document.

The affidavit for the search warrant isn’t much better; indeed in some ways it is worse. As far asa I can tell, the affidavit has two main claims of illegality. First, that the defendant said the broadcasts were illegal (note that the affiant himself never comes out and says they’re illegal in so many words himself — the affidavit is very artful in this regard; he sure makes it sound bad though). I don’t know if the defendant was misinformed, intimidated by the listing of al-Manar as a terrorist groupl, or if he was just puffing the goods by trying to make them sound illicit, but even honest error about crime does not a conspirator make.

In fact, to my admittedly untrained eye the affidavit has “shopping expedition” written all over it — it hints hard that there may be all sorts of secret, dangerous, encrypted messages hiding in the terrorist broadcasts or in the defendant’s computers that the government wishes to seize and hold for a long time. Yet it doesn’t give much in the way of specific reason for that belief except that there sure are a lot of computers, USB sticks, hard drives and other gear in there, and there are terrorists on the other end, and our experience says they must be up to something nasty.

Unlike the indictment, the search affidavit mentions that there might be a charge of material support under 18 USC sec. 2339b. On its face that would seem a potentially more plausible charge than the IEEPA allegation, for sec. 2239 provides in part:

It’s a real stretch to say that just providing access to TV shows is “material support” but if money changed hands that might do it. Of course, finding a statutory hook for the government’s case only brings us back to the First Amendment issues I mentioned earlier, but this time more directly. It’s quite odd, therefore, that the indictment didn’t mention the material support charge at all, and I wouldn’t be surprised if this gets fixed in a superceding indictment.

But let’s back up a bit first: Other than alleging the re-sale of al-Manera TV — which it doesn’t clearly say is illegal — the indictment’s only other fact of substance is the defendant’s foreign travel to arab countries. I know that judges are pretty free and easy sometimes on warrants; I know that this is most likely to be true in a case where the government shouts ‘terrorism’. But I have to wonder — and would love to hear from someone more expert than me — whether this affidavit when stripped of all the heavy breathing and filler actually would survive a suppression montion. I’m guessing that one issue will be what the DA’s investigator believed or could have believed: did he have a good-faith reasonable belief that the transmissions were illegal, even if they were not?

Let’s back up some more. Suppose — just suppose — that the US Attorney’s office understood the First Amendment issue real well, and indeed have actually read IEEPA. I would expect nothing less from the office in the Southern District. Then either they are playing their cards real close to the chest, which remains possible, or this was a shopping expedition, which is also possible — or this was just a conscious abuse of the system to shut down something hateful. If it should turn out that the operation was conceived as a means of shutting down access to these broadcasts by seizing the equipment (return of which will take months if not years … and they usually don’t come back undamaged either…) then that would be a serious First Amendment violation. But it would be one that our legal system tends to ignore: it neither punishes the perpetrators nor well compensates the vicitms.

In the end, most of this is speculation. The only certain fact is that indictment is very vague on the key point of what exactly the crime might be. From reading it, it’s not clear to me whether the government claims that there was some further future plan of which these (legal) actions were but a part, or if the ultimate claim is only that these (in my opinion almost certainly legal) acts took place? If the claim is of some grander plan, it is awful vague — perhaps because the government knows or hopes that it’s seized the evidence or because they’re hoping to catch a bigger fish. If on the other hand the claim is that this indictment has the whole story, it’s a very worrying attempt to extend IEEPA where I don’t think it will go.

One minor note: the affidavit attached to the indictment describes the defendant as having a Pakistani passport and a US alien registration card (a green card), which is consistent with the NYT account noted above. So Mr. Iqbal is probably a permanent resident. I hope that takes us out of Kleindienst v. Mandel territory, for that is indeed an ugly place to be.

Pdf of Complaint, and pdf of Search Warrant Affidavit.

This entry was posted in Law: Free Speech. Bookmark the permalink.

1 Response to More On the al-Manar ‘Terrorist TV’ Case