The silly season is starting early this year, and there are lots of Florida animal stories in the news, notably Fla. Island Town Overrun With Iguanas (Boca Grande, far from here) and Florida’s newest problem: Burmese Pythons (not far from here at all).

Florida’s newest problem is roughly the circumference of a telephone pole. It has no toes. It snacks on rabbits. It’s the Burmese python. And in South Florida, the problem is growing in number and in feet.

“Last year, we caught 95 pythons,” said Skip Snow, a biologist with Florida Everglades National Park. That’s not counting the 13-footer that exploded after trying to eat an alligator, or two others that got loose and ate a Siamese cat and a turkey.

Actually, despite the headline, it’s not that new, but it does give me an excuse to link to the old story about the python-alligator death match. 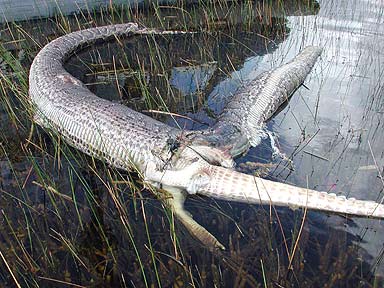 Caption: The hind legs and tail of a two-metre alligator protude out of the body of a dead, four-metre python in Everglades National Park in Florida.
But back to the new python scare story for a minute:

Miami-Dade County Fire Dept. has a “snake squad”??? And they’ve caught no local politicians? This requires an investigation. (Also, does the Fire Dept. have a ‘cat up tree squad’ or is that just part of normal duties?)

This entry was posted in Florida. Bookmark the permalink.