Posted on November 13, 2005 by Michael Froomkin

KAL in the Economst, this week: 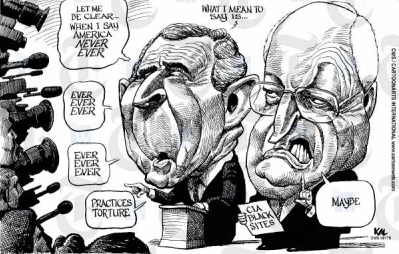 Forbes, today, since TIME doesn’t seem to have it online yet:

CIA allegedly hid evidence of detainee torture – report: CIA interrogators apparently tried to cover up the death of an Iraqi ‘ghost detainee’ who died while being interrogated at Abu Ghraib prison, Time magazine reported today, after obtaining hundreds of pages of documents, including an autopsy report, about the case.

The death of secret detainee Manadel al-Jamadi was ruled a homicide in a Defense Department autopsy, Time reported, adding that documents it recently obtained included photographs of his battered body, which had been kept on ice to keep it from decomposing, apparently to conceal the circumstances of his death.

This entry was posted in Torture. Bookmark the permalink.