Summing Up ‘The Great Debate’ at State of Play III

A legal system based on geography, territory and physical force is inappropriate for Virtual Worlds

I had the uncomfortable task of summing and declaring a winner.

[This is the second of three posts on State of Play III conference. The first was my notes from the The Great Debate at State of Play III, with an outline of what the panelists said. The third post will be about the conference more generally.]

Here’s more or less what I said:

When Beth Novak asked me to be “judge, jury and executioner” for this event, I understood the assignment to mean that I was supposed be a potted plant for the bulk of the debate, then sum up and award prizes to winners. I agreed because I don’t like to say no to Beth, but the trouble is, I am friendly with and indeed admire the people on both sides of this debate, and if I have to pick winners, it means I also have to pick…losers. And I don’t like the sound of that. So you can imagine how cheerful I was feeling yesterday when I mentioned this problem to Beth, and she said that, yes, I ‘was a fool to agree to do this’.

My initial idea to get out of it was to try to find a baby and cut it in half, but instead I decided to outsource the task of selecting the victors, leaving me with just the task of summing up. So I have put up a page at http://poll.umlaw.net in which I invite the audience here and online to act as a virtual jury and vote as to their views in this debate. You are asked to vote only once….and if you think there is a legitimacy issue with this decision method, well, that’s something to consider when voting.

This has been a very rich debate. It seems to me that there have been four emergent themes.

I. Law is about violence

The first theme is that law is about violence, in two senses. The first is the commonplace that law is how we control both lawful and unlawful violence. The second is, as the late Rober Cover taught us, that law is ‘juripathic’, that law is also about the destruction or delegitimation of world views that are not recognized as belonging within society.[1]

In one view, whatever ‘autonomy’ enjoyed by Virtual Worlds come about because the Virtual World has been, in effect, ceded a degree of self rule (contractual or otherwise) BY A SOVEREIGN as regards those persons subject to that sovereign. You might describe this as the autonomy being ‘granted’ or ‘recognized’ or ‘sub-delegated’,

A second more, normative, view argues that the temporal authorities have no right to impose their will on Virtual Worlds.

A third, more positive vision, states that national sovereigns cannot impose their will on Virtual Worlds, even if they might wish to.

The differences between these visions matter. A consequence of the first vision is that whatever autonomy is granted is easy to revoke. It also accepts the role of law in the background, characterizing bargains within a Virtual World as ultimately taking place in the shadow of the law. The second vision makes a strong legitimacy claim; conversely, the third–although not leading there inevitably–lends itself to results which are illegitimate.

Another thing that emerges is that questions about what law applies to Virtual Worlds are often a special species of the arcane legal genre known as choice of law. Traditionally, courts resolve choice of law problems with particular attention to location, but there are also many other relevant factors. Another aspect of the Virtual World choice of law question is the extent to which allowing a different answer for a Virtual World than one might have ‘elsewhere’ is the possible distributional consequences  are we going to have a different law for the people who have the money to run a computer with an expensive graphic card.

Finally, choice of law is sufficiently arcane that it is often obscure to the end user, not just to regular folks but also even to large corporations who sometimes discover in litigation that the court takes a different view of what law applies than their lawyers had advised them would be the answer. (This is even more the case for P2P applications, which do not even have a central and persistent location to which the law can latch on.) This obscurity leads to…

Here the debate is easy to caricature. On one hand we have those who characterize their opponents as saying, “government…brought to you by SONY” or, more positively, who assert that, as Victor put it, “democracy is better than the shopping mall”. On the other hand we have those who see a rich, bottom-up, user-determined social and legal structures. And then we have the audience here reminding us that EULAs are not consent, that they are contracts of adhesion, that no one reads them anyway, and that they are thin reeds on which to base a theory of legitimacy.

Lurking alongside all this is a parallel idea that games are about play, that there is a purity to play that is only sullied when the law intrudes into a game.

Before going to the verdict, let me offer a recharacterization of the underlying elements. One could characterize the division between these two panels as “optimism v. pessimism,” or “Austinians v. radical ‘bottom up’ democrats,” or perhaps as “Muggles v. the Ministry for Magic”.

On the one hand there is the optimism of those would claim the Virtual Worlds as virgin jurisdictions. In this view, these new breakaways create an opening for new flowerings of the human spirit. For example, David Johnson argued that as normative matter Virtual Worlds should be deferred to, if only by sovereigns using their powers, even if not positively required. Indeed, David argued that Virtual Worlds could become more democratic than regular democracy. The hope is that law making in these new spaces will be decentralized in its creation, and yet also constrained by other decentralized forces including the ability to vote with one’s feet or with one’s mouse.

Contrast this view with the worldly pessimism that defines where the other side begins. Unhampered by naive optimism, there seems no escape from crime and fraud, and even if there were a way to escape the rules we have painfully built up over decades, rules designed to control Holmess “bad man,” that escape would only lead us to worlds of greater pain. This legal world we have now is, the pessimists tell us, more or less as good as it gets. Any improvements will be hard won and at best incremental.

[At this point we checked the vote and found the jury more or less deadlocked, although in fact the “nos” had a small edge.] 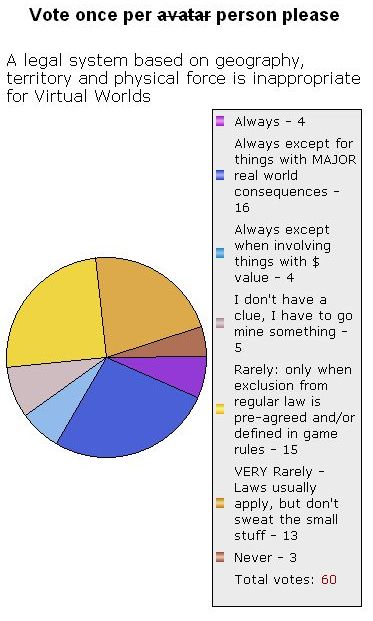 [I therefore took on the task of choosing the winner.]

I take on this task of picking the victors as a pessimist who wishes he were an optimist; a believer in bottom up democracy who is not an Austinian; a Muggle who would love to cast spells.

As such, I will award the prize to the affirmative — even though I don’t agree with them — because without them there would be no debate.

And yes, at last I have managed to find a baby to split.

This entry was posted in Talks & Conferences, Virtual Worlds. Bookmark the permalink.