The United States is telling foreign journalists they have to go home to renew their passports.

It looks as though a lot of foreign journalists will have to go to through some new, tougher hoops to report on the United States.

That means 20,000 journalists who have been able to renew their visas without too much hassle will now be faced with a lot of additional time—from 4-6 weeks to up to six months—and some extra expense to renew them.

As of July 16, holders of class I Visas (foreign media representatives), as well as several other classes of nonimmigrant visas, will be required to reapply at a U.S. Embassy or Consulate abroad when those visas expire.

I've mentioned before that the US is treating foreign reporters badly. No doubt many of them will attribute this latest madness to the mauling that Bush got from an Irish interviewer.

In fact, however, it's a logical outgrowth of the requirement for biometric passports a requirement that is going to kill the Florida tourist industry in an election year unless Congress delays it.

As a closing thought, have a look at this great post by Alex Halavais in which he proposes we post appropriate notices at the border: 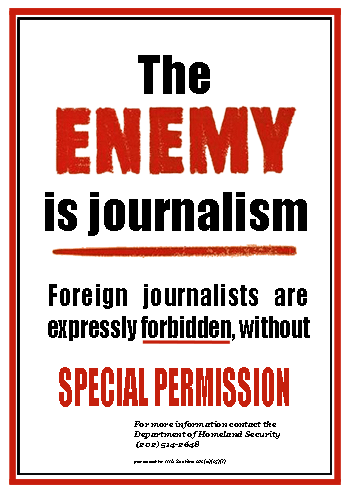 This entry was posted in National Security. Bookmark the permalink.