Lies And the People Who Ignore Them

Mark Kleiman has assembled what he calls a very partial list of Bush lies. And while it's a good list, it is a very partial list, mixing the deadly and the trivial. The problem is that there are so very many, many lies to choose from. (Other compilations include Bushwatch, Bush-lies, Caught on Film, and Bushlies.net .)

Every so often, I get a feeling of disconnect from the body politic. I recall being stunned to discover in college (during the Iranian hostage crisis) that friends of mine, people I considered basically sensible, had taken a trip down to Washington DC in order to throw rocks at the Iranian Embassy.

I have a similar feeling of disconnect now. How can it be that about half of the voters in this country tell pollsters that they are basically happy with an administration that lies like a rug? This is surely one of the central questions of the day.

END_OF_DOCUMENT_TOKEN_TO_BE_REPLACED

Posted in Politics: US | 3 Comments

A Visual Joke And Also A Decent Exam Question

Here's a fun visual joke from David Weinberg that he calls Trademark Registered Copyright (and which he has placed in the public domain, thereby preventing the hypo from becoming a realo). I suspect that with only a little effort, it could be turned into a nice exam question in Trademark law. Which I'm not teaching this semseter. 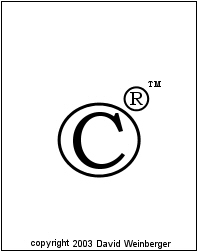 What I need is exam questions for Administrative Law and especially International Law, which I'm teaching for the first time.

Does Hackerdom Need an Emblem?

If there were to be a hacker emblem, Eric Raymond, author of How To Become A Hacker, The Cathedral and the Bazaar, and the original Jargon File, is surely as good a choice as anyone to pick it.

And if someone were going to pick an emblem, what better than a symbol from the Game of Life. Some might vote for the blinker, the most-seen object in Life, others for the glider gun, block, the beehive, or the integral sign, but the glider is fine.

But really, even keeping in mind the more comlex and nuanced way that Eric Raymond uses “hacker,” as opposed to the USA Today cartoon version— are hackers the sort of group that need a logo? (See the Slashdot thread. I particularly liked the suggestion that hackers are defined by the color of their hat.)

Actually, yes. Hackers require a small but constant supply of new T-shirts. For some it is because the old ones wear out from being worn and laundered day after day. For others it is because the old shirts get too tight round the waist. Still others find that their old T-shirts get up and walk off after months of not being washed.

And this will look nice on a T-shirt.

The US Government's Office of Foreign Assets Control has told the IEEE, publishers of engineering journals that it cannot edit contributions from persons in Cuba, Iran, Libya, or Sudan. This is very hard to understand as anything but a First Amendment violation. Unfortunately, I can't find the primary sources online, and the secondary sources are not as clear as I'd like.

On 30 September, the U.S. Treasury Department (Washington, D.C.) informed the Institute of Electrical and Electronics Engineers (IEEE) that it must continue to limit members’ rights in four countries embargoed by the United States: Cuba, Iran, Libya, and Sudan. The ruling means, among other things, that the IEEE, the world’s largest engineering association (and the publisher of this magazine), cannot edit articles submitted by authors in those countries, making it effectively impossible for most such work to appear in IEEE publications.

If IEEE wishes to edit and publish the work, the Treasury Department informed IEEE, it will need to apply for a special license. That ruling could in turn have far-reaching consequences for hundreds of other U.S.-based scholarly publishers and professional organizations.

In the meantime, however, IEEE members in the four affected countries are prohibited from being elevated to a higher-grade membership; using IEEE e-mail alias and Web accounts; accessing online job listings; and conducting conferences under the IEEE name [see “Services in Dispute,” p. 15]. They still receive printed journals and other publications. In January 2002, when the IEEE first imposed its restrictions, it had over 1700 members in the embargoed countries, nearly all of them in Iran; only about 200 are still members. IEEE has about 380 000 members worldwide.

We’ve been working with OFAC to better understand what services we can still provide,” Adler says. “But [OFAC] drew the line very explicitly on editing.” In his letter to IEEE, OFAC director R. Richard Newcomb stated that “U.S. persons may not provide the Iranian author substantive or artistic alterations or enhancement of the manuscript, and IEEE may not facilitate the provision of such alterations or enhancements.” Such enhancements include “reordering of paragraphs or sentences, correction of syntax or grammar, and replacement of inappropriate words.”

Foreign asset controls are designed in part to stop money and services from going to 'bad' regimes. The statutes and regulations I am familar with all contain exemptions for “publications”. From what I can see, the government argues that editing is some sort of prohibited service (or technology export? If so that would open a nice can of worms — a perfect topic for a student's law review note…). Whatever they may call it, I have a lot of trouble imagining a regime that requires journals to get a license to allow them to edit foreigners' submissions as anything other than a classic prior restraint on speech.

END_OF_DOCUMENT_TOKEN_TO_BE_REPLACED

A Little Bit About Libel Law (Inspired by the Atrios affair)

I'm a regular reader of Eschaton, but I had a busy day, so it was something of a shock to discover this evening that he's gotten a cease-and-desist letter from some poor deluded soul who claims he's being libeled both by Atrios and by commentators on the Eschaton blog, and that half the blogs in the world have weighed in on it.

Plenty has been said about the merits, and I won't add to it. (See here for one roundup of links.)

But it might be useful to summarize some of the relevant cyber-law principles, which differ slightly from ordinary libel law. In what follows I treat the cyber-law aspects (only) of three issues: (1) Libel by a blogger; (2) libel by a commentator to a blog; (3) whether a lawsuit can force an ISP to reveal the name of an anonymous blogger.

END_OF_DOCUMENT_TOKEN_TO_BE_REPLACED

Just after dropping off the kids this morning, I hit the wrong button on the car radio this morning — wait! there's a point to this story! it's not just pointless self-indulgent diaristic blogging! — and the radio flips from NPR, where it usually lives, to AM, where I never go. And I find something strange.

Local AM radio around here usually is below awful. But instead of shock jocks, or wall-to-wall ads, or mindless sports talk, or crime-and-wrecks, what I hear is a calm, measured voice, speaking in long sentences, expressing complex ideas. And the voice….the voice is saying things I thought you didn't get to say on the radio. Especially not in Florida.